You May Have Won the War…

But the Battle with Incubus Rages On!

Wowza… in just 4 days, you and your buddies have slain over 3,000,000 Vampire Bats, Hemogoblins, and Vampire Ghouls in the Mogloween war! And now Incubus the Vampire Lord is waiting for YOU. He’s a level 35 and has 32,000 HP—so it’s safe to say that this overgrown Vampire Bat really sucks blood. 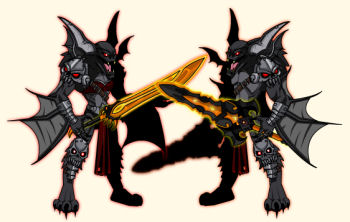 Good news though: he’s got some pretty impressive item drops if you succeed in defeating him!

Granted, Incubus isn’t going to willingly hand them over. You are ganna have to fight him over and over again if you hope to get his sweet Mogloween swag (or just be REALLY lucky and get all those item drops in 1 kill, which would be like a .05% chance of happening).

There are only a few hours left to become a 2nd Upholder and to play though the Birthday Event! Check out Cysero’s Design Notes for last minute opportunities before they all go RARE! Thank you everyone for making our 2nd Birthday the best one yet—we couldn’t have done ANY of this without the support from you and your fellow Members =D

How to defend BattleOn 101

The Vampire Lord's army grows larger with each passing day. "There is no way we can win...", says head of the guard, Sir Render, "The attack on BattleOn could happen any day!" However, it seems the Vampire Lord is intending on making the army EVEN LARGER before launching his assault againt our small town. Perhaps he is waiting for the 31st? King Alteon and Empress Gravelyn met last night in game to form a plan of attack. Things did not go smoothly... and now they are seeking the advice of Safiria, the Vampire Queen.

Meanwhile, it has been confirmed that One-Eyed Doll will be premiere their new music video INSIDE AQWorlds. this weekend Their new song is an awesome rock remix of one of their original songs... and oddly... it is the PERFECT music to battle this Vampire Lord's minions too.

Kimberly, Lead Singer of One-Eyed Doll and former Chaos Lord, will be making a special appearance in AdventureQuest Worlds this weekend to premiere a new song!!!!!!! Check back tomorrow for more details.

Four scouts were sent to determine the size and strength of the Vampire Lord's army in Mystcroft. Alas, only one returned... the other three are now reportedly minions of the Vampire. It gets wose, the army preparing to attack us... IS MASSIVE! King Alteon and Empress Gravelyn are meeting a few times in-game tonight and tomorrow to come up with a plan to defend the town of BattleOn. Things are looking grim however. The Vampire Lord's Army is already larger than we can possibly handle and is growing each day. By our scouts estimation we only have between 3 to 6 days before they attack!

This weekend is your last chance to get the 2nd Upholder Achievement and the collector's Onyx Starsword! To get the achievement upgrade to Member or have an active membership on or after November 3rd. Like Founder... once this achievement is gone it will never be available again. Thank you to everyone who is supporting the game during it's 2nd anniversary!

The Pumpkin Carving Contest ends on October 31st! Check out the entries.... they are AMAZING!

... sharp fangs and a sweet tooth.

Rumors are spreading that a Vampire Lord is gathering an army of monsters. We believe they intend to stage a full out assault on the town of BattleOn within the next 6 days. Warlic commented on the increasingly worrysome situation, "Interesting. The pathway of mist that connects our world to the haunted town of Mystcroft only lasts during Mogloween. If this Vampire Lord's army is successful, they will create a strong link to BattleOn and suck it into the mist at the same time their town dissapears."

All Vampire Hunters, Experts of the Supernatural, and all Heroes should be on standby... we are sending 4 scouts to keep us informed of enemy movements. We will have to find some way to distract the current Chaos Lord as we handle this imminent threat. Check back tomorrow for an update!

P.S. Please ask Beleen to change the Design Notes back to black... it is really hard to type this with my eyes shut.