Last week... you, Aurelio Voltaire, and Memet were trapped inside Aurelio Voltaire's nightmare in the first part of our three-week Harvest of Nightmares holiday event. This week, log in and battle Memet's creepy dreams as you fight to escape and return home in time for the Harvest Fest. But beware, hero! Friday the 13th may be over, but the Nightmare Realm is a dark and twisted land. You never know WHAT you'll meet... or what might decide to follow you home. 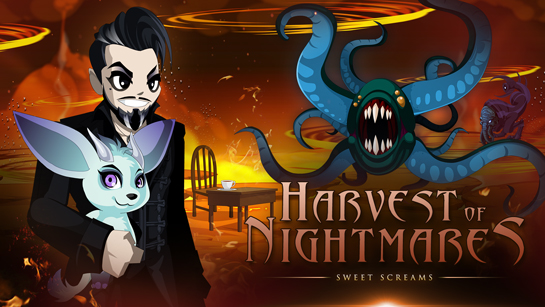 This weekend, /join memetsnightmare to begin your adventure:

We've got a host of dark and creepy rewards for all heroes coming your way this weekend! Battle monsters in /memetsnightmare to get the merge shop resources to create the Terrifier the Clown armor set and Spooky Skelly suit! 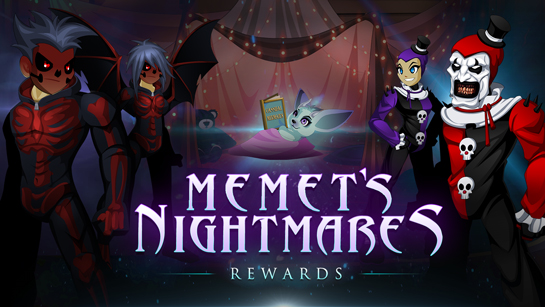 Memet the Nightmare Moglin is the staff persona for Memet, AQWorlds' lead writer. She is the one who writes and designs the weekly releases you battle through. She is a huge fan of dark, offbeat, Lovecraftian/Geiger style art and fantasy... which is why her in-game NPC is a baku/nightmare creature. She’s crafted this nightmarish new event for you to battle through while she concentrates on celebrating leveling up during 2020. Wish her luck or happy birthday on Twitter!

They say love is eternal... and with our ghostly wedding gear, it CAN be! Find this hauntingly beautiful armor set in your Featured Gear Shop until November 30th. Then they'll leave be gone... FORVER! 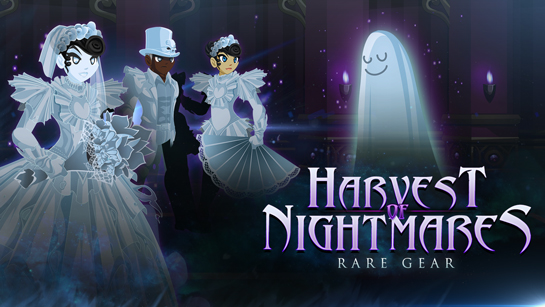