Aurelio Voltaire Returns for an all-new Friday the 13th Event!

Friday the 13th has returned once again… and as in years past, something dark, deadly, and VERY strange is happening on Lore. This weekend, log in and join special guest Aurelio Voltaire as he browses through Mysterious Johnson's Oddities Shop. And to help you get in the SPIRIT of the event *cough* - just a note of caution: Don't. Touch. The. Doll. O_O 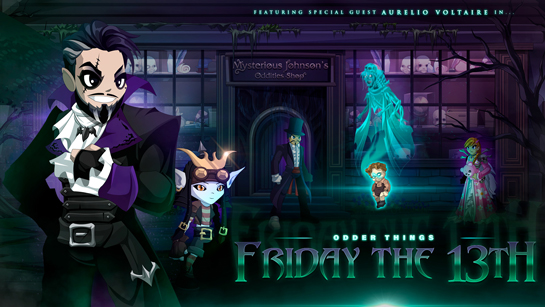 After you complete tonight's event, talk to Mysterious Johnson and complete his quest to farm for wicked new reward gear. Plus, battle this weekend's boss monster to unlock the pieces of the Spooky Spirit Hunter armor set! 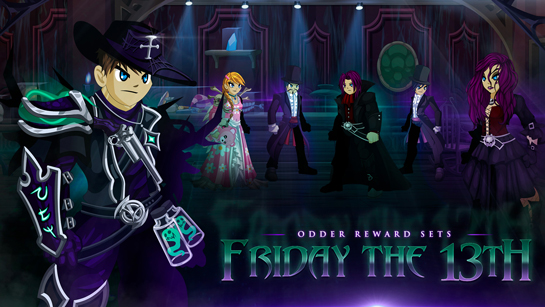 Plus, return next Friday as we add in even more gear* will arrive in the merge shop and as monster drops!

Note: the Necrayaya set for Cinco de Mayo has also been added! Battle the Zard in Battleontown to collect all of the 0 AC and member-only seasonal set items!

It wouldn't be Friday the 13th without new rare gear to commemorate the event -- and this week, our artists have channeled the madness of the moon and the healing power of some very dark and deadly forces. Find the Moonlit Couture and Cursed Healer sets in your Featured Gear Shop until Friday, June 10th. 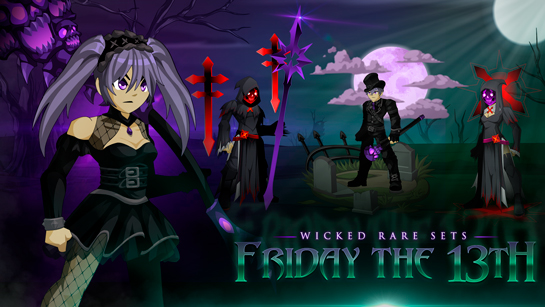 What is undead can never die… Not when there is always another Friday the 13th. /join Voltairetown to battle through all our previous Friday the 13th seasonal events. 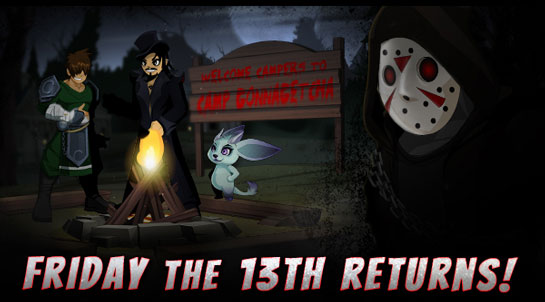 Friday the 13th and Aurelio Voltaire go together like Evil Armies of Undead and Horror Movies. So of course, this Friday our always-positive, family-friendly game team and community want to welcome him back for another musical event! This weekend, slay your enemies as the strains of his songs, "The Headless Waltz," "Goodnight Demonslayer" and "The Night" echo through the halls of Mysterious Johnson's Oddities Shop. Stay up to date with all his music, art, and news updates on his site and once you've finished the event, make sure you check out his Youtube series, "Gothic Homemaking with Aurelio Voltaire." 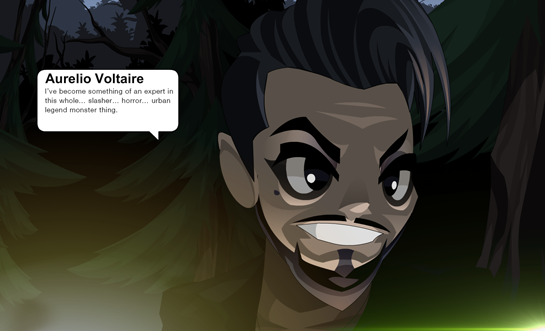 Aurelio Voltaire is the maker of music, films, books, comics, toys and... mayhem. He has appeared in almost ALL of the AQWorlds Friday the 13th events... and has become a fan-favorite for our players (not to mention beloved by goths, trekkies, and music-lovers in general).

On behalf of the entire AdventureQuest Worlds team, we want to thank Aurelio Voltaire for being a part of this special event!

Tonight, the Class Test Realm opens! As a reminder, this server will be for people to try out and give feedback for in-development classes and class changes. Anyone who’s over level 40 and has a confirmed email can join this server. You can read more about this here. Once you join the server, you can find information about the classes and how to give feedback by speaking to Arlen.

Remember that nothing on the CTR server is final, and everything you see is subject to change. There won’t always be changes in progress, and not every class change will pass through the Class Test Realm. However, you can keep up to date on the CTR by joining the official Discord, or following the AQW Class Council on Twitter!

Battle Healer has been finalized and made into its own item. You can find it in the PvP Trophies Merge, where the other PvP classes are.

Reminders About Class Points (courtesy of our Bugs department)

Class Points are obtained when you kill any monster, but will scale based on your and your opponent’s level.

In order to receive full class points, your opponent must be the same or higher level than you. For each level they’re lower than you, you will receive 5% less Class Points.

For example, if your opponent is lower by:

This means that you cannot fight super low level monsters to effectively rank up classes when you’re of a high level!

Darkness.  Destruction. And madness are all happening this month in AdventureQuest Worlds! Don't miss a moment, a battle, or a limited time reward. 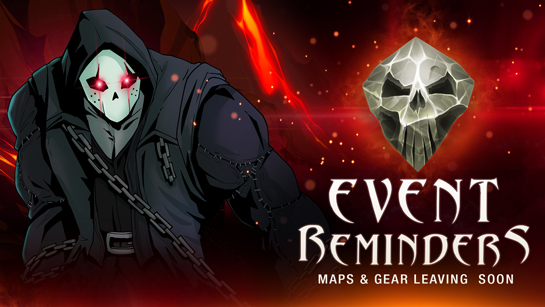 Revenge of the Sixth

Our May the Fourth Event Continues this weekend!

On Wednesday, all our out-of-this-world Lore Wars gear and seasonal adventures returned. This weekend, log in as our May the Fourth celebration continues in /zorbaspalace! Talk to Zoda the Space Moglin. To guide your path he has come. Complete his quests to craft a weapon of your own fate you will. Then unlock all of the rest of his rewards you must. Mehehehe. 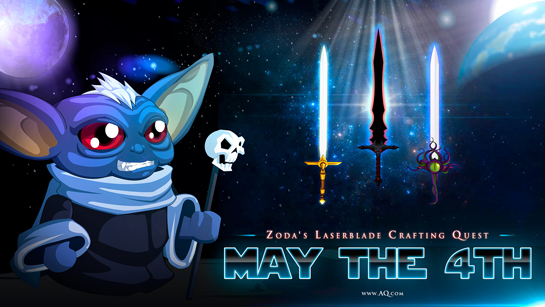 After completing Zoda's quests, talk to Memet for even more adventures!

Then head to the MurderMoon map. Fifth Lord Sepulchure is the most feared man in the galaxy, and has conquered countless worlds for the Fifth Order. He will NEVER stop until his master is satisfied. This weekend is the best chance to take him out. Talk to Hammer Wateru; he needs your help to destroy the Fifth Order’s superweapon and ensure the Freedom Fighters' victory! 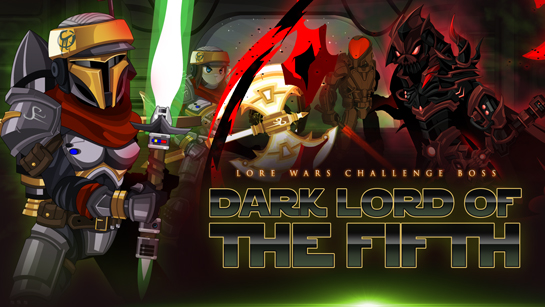 Come to the Darker Side for Seasonal Rewards

Find all-new out-of-this-world armor sets in your Featured Gear Shop and in Zoda's Merge Shop in /zorbaspalace this weekend. 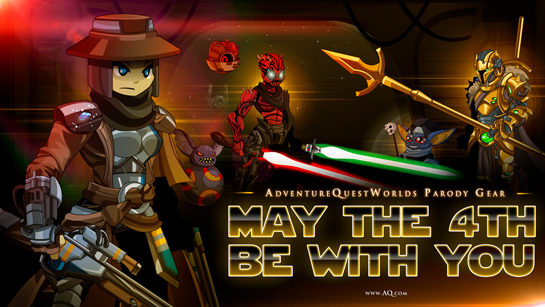 And don't miss the interstellar seasonal gear that released in previous years.

Over the last couple of years, we've been bringing back previously rare class skills paired with new art so that ALL players can enjoy the gameplay. Previously, the DarkSide Class debuted in 2012*. Last year, we brought the class back, only available by farming! Talk to Hammer in /murdermoon to begin the battle to create a cargo-hold's worth of new space-gear... including ALL of the items in the DarkLord Class 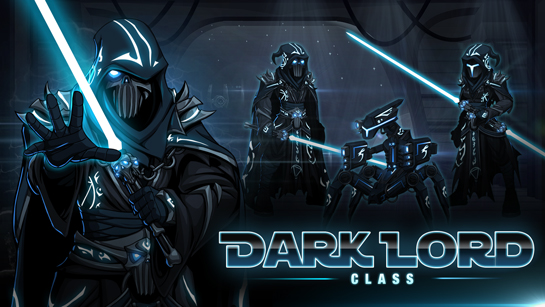 The blue variant of the seasonal DarkSide 2.0 class is available for ALL players. A diabolically-evil red armor set variant will be locked to higher-level heroes. No OG Darkside class required.**

* OG Darkside Class owners, you'll keep your original, exclusive class just as-is, with the same art, battle pet, and skills as you've come to know and love. And if you check out the Darkside Orb's quest in /curio, you'll find a permanent, 0 AC version of the Hate Wolf battle pet PLUS a free version of the class have been added as a quest reward.

"May 4 is considered a holiday by Star Wars fans to celebrate the franchise's films series, books, and culture as well as strict religious rituals. The date was chosen for the easy pun on the catchphrase "May the Force be with you" — "May the fourth be with you". Even though the holiday was not actually created or declared by Lucasfilm many Star Wars fans across the world choose to celebrate the holiday." 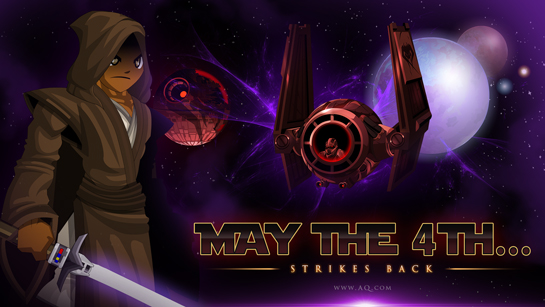 From out of the depths, a sinister new army rises. They herald the dawn of a darker, deadlier elder deity. BEWARE.  Get the Eldritch Guardian upgrade bonus pack when you buy any AdventureCoin or Membership package of $10 USD or more and unlock all of the gear and character page badge. 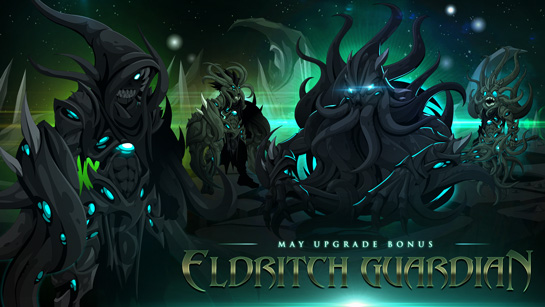 Once you've chosen the Eldritch Guardian Upgrade Bonus Set bonus on the Account Manager page, log in and find the set's shop in the Other Achievements tab in your Book of Lore.

In an effort to make obtaining Necrotic Sword of Doom less frustrating, we have updated the existing three Void Aura farming quests to reward a more consistent amount of them upon each turn in. We have also created two new daily quests in order to provide additional sources of Void Aura upon completion.

The following quests have been updated to now reward either 5, 6, or 7 Void Aura upon completion instead of 2, 5, or 10:

Two new daily quests for Void Aura have been added:*

Glimpse Into the Dark (Daily) (Member Only)

*Please note that the two Void Aura daily quests will not be affected by increased drop quantity events.

Additionally, Braeus now won't appear in /shadowfall until the player is level 60.

The Undead Plague Spear could be easily acquired by a few players for a long time, so we decided to make the quest requirements equal for everyone while also increasing the drop rate of the Bone Axe instead.

The following items have had their boosts updated to be more in-line with other items of similar obtain difficulty:

In order to streamline early game progression, certain quests in the following storyline areas have had their Gold, XP, and Rep (where applicable) rewards increased:

Darkness.  Destruction. And madness are on their way! Log in all month long for new seasonal events, this year's only Friday the 13th event, wicked rewards, and a new chapter in Darkon's Saga! 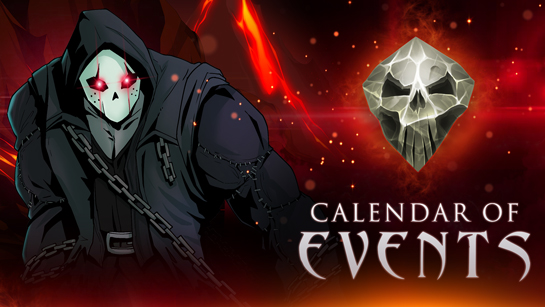 May 4 May the Fourth seasonal maps + gear return

May 13 Aurelio Voltaire returns for Friday the 13th

Upgrade to unlock this member-only perk!

Members, log in and talk to Twilly in Battleon to get your two free Treasure Chest keys on the first of every month, then turn them in to get free gear! More new gear is added to Twilly's Treasure Chests throughout the year, so keep checking back! 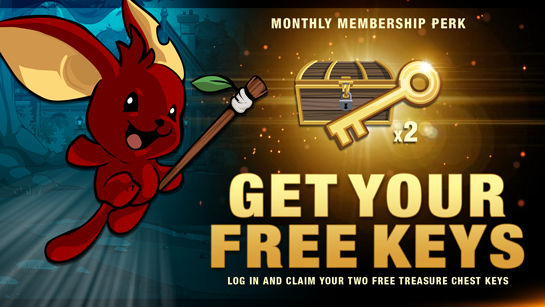 Don't forget to spin the Wheel of Doom!

Everyone loves to get prizes... and that's why we give AdventureQuest Worlds members get one free spin every day while their upgrade is active! (That's in addition to the free weekly spin all players get.) 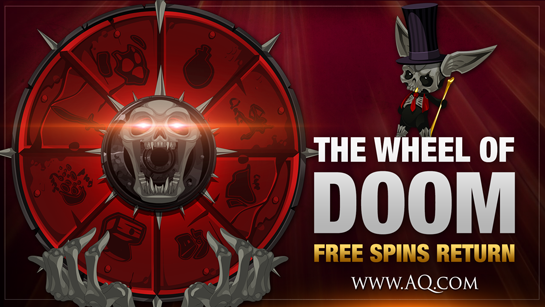 Want to get in on this?

If you are not already a member in AdventureQuest Worlds, please consider supporting the game by becoming one, or by purchasing AdventureCoins.

You make our games possible, and for that Artix,the AE team, and I /salute you!