This Weekend: Enter the Underworld Arena

Battle the Undead, Join the Dark Hand, and more!

This weekend, Axeros, ally of Dage the Evil and leader of the Dark Hand, welcomes you to the Underworld’s deadliest Arena! 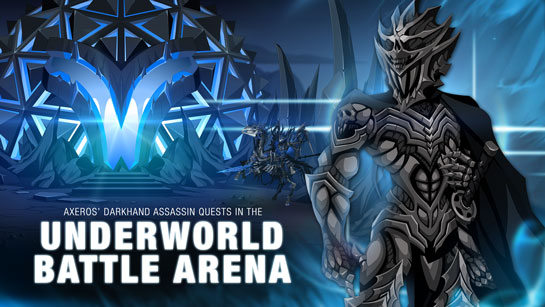 Built by generals of Dage's Undead Legion, this battleground serves as a proving ground for fallen adventurers who refuse to lay down and die. The best arena combatants may be recruited into Dage’s Undead Legion. Some may choose to work with Axeros... IF they pass his test and quests. IF you think you have what it takes - test your might against the warriors within, and reap the darkest rewards. (literally, the set is based on Vantablack, one of the darkest substances known to man).

This event features Axeros, in a belated celebration of his birthday (send happy birthday wishes on on Twitter!) and serves as a PvE* lead-in to next week, as we celebrate Dage the Evil's Dark PVP** birthday.

Axeros' DarkHand Assassin shop can only be unlocked if you get the Soul Keeper Blade from his Worthy of the Blade farming quest.