Hello all! It's good to be back after a very fine trip to Chicago* to surprise a family member for their birthday. I've got my bug-boxing gloves on and am ready to hit the DNs with some updates, so let's get to it. 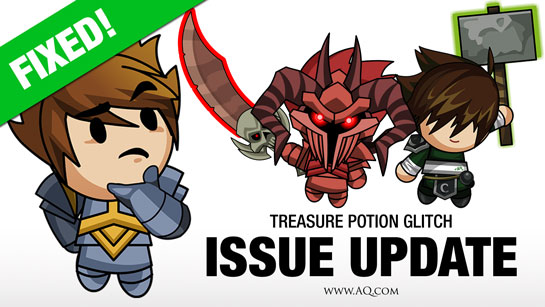 Yesterday, Yorumi and the Crew of Doom confirmed and fixed an issue with Treasure Potions dropping more frequently than they were supposed to (where x6 potions were dropping when only x1 was intended).

Here's the what and why of that bug, and its fix.

That might not sound like a problem, but it threw off the balance of the Doom Merge Shop prices. If we increased the amount of Treasure Potions that each spin gives, we would also need to increase prices in the merge shop.

The Cause: The Wheel of Doom is built sort of like the Treasure Chest, where you never get an item you already have. On the rare off-chance that the Wheel of Doom tried to give you a duplicate item, we built in a failsafe to give you x5 extra Treasure Potions instead.** Instead, it was dropping the x5 failsafe potions every time you spun and did not get a bonus item.

The only way anyone will currently get the 6 potions is if they happen to already have an item that is a reward on the wheel, and they'll get it just once per item like that.

The Solution: We fixed the code giving x5 Treasure Potions for every spin you didn't get an item. It now rewards x1 Treasure Potion, as intended and listed in the Design Notes and Guides.

After a flood of community feedback and sending Captain Rhubarb back in time to dig through some old code, we've arrived at the best compromise, so you can make the most out of your spins while maintaining the reward cost balance.

Changes incoming to the Wheel of Doom:

If you got a ton of Treasure Potions legitmately from this bug, you lucked out! You will get to keep all of those Treasure Potions as our way of apologizing for the issue and any inconvenience.

The free Weekly Spin for ALL players is still in testing. We will know for sure by tomorrow (once the full week has passed) whether everything is working as intended, and if it can release this Friday.

Due to a medical issue for one of our team members, we have rearranged the November calendar of releases. Instead of Memet's Birthday update, this Friday, we'll launch the SpellSword Scavenger Hunt for Inanitas'*** birthday, and Featured Gear Shop update.

Next week, all our seasonal Thanksgiving events return, along with this year's new update and Black Friday gear.

* It will always be sweet home Chicago for me.

** That also helped avoid the possibility that you wouldn't get anything on that spin.

*** Inanitas is a member of the AQW and DF dev teams, as a guest writer.