Or should I say... The Throne of Darkness Finale Begins?!

If you've been keeping up with the Throne of Darkness Saga*, you know that we have ONE CHAPTER left! Artix and Memet are meeting next week to pin down the final details of the two-part finale that will release on... October 7th and 14th. 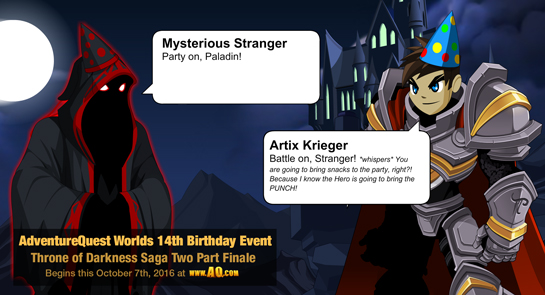 That's right, the Throne of Darkness finale will be this year's big birthday release, and MAN, I cannot wait until you all play the end! But that's a birthday surprise, and I don't want to spoil it for you.

This October is AdventureQuest Worlds' 8th birthday and Artix Entertainment's 14th anniversary! That is CRAZY, and I cannot believe how fast time has flown!

What?! Why are you combining the Saga finale and the Birthday?!

GOOD question! For a couple reasons:

I know I said no spoilers in the first paragraph of this post, but what I WILL spoil is the theme of this year's birthday CLASS - you all might remember the evolved Paladin art Dage created for Artix last year? We've had people asking since then to release the armor... and next month, we're going to go one better and release an all-new evolved Paladin class!

The Throne of Darkness Saga was Artix's brainchild, and a story he's held close to his heart. What better way to thank him for all the time, effort, energy, and love he's put into the story than by releasing a new Paladin Class for its finale?

The name and skill details are still in progress, but starting October 14th, you'll be able to farm for or buy with 2000 AdventureCoins our newest Paladin Class!

* And if you haven't, now's the time to start! Click the "Throne of Darkness Saga" button in your game menu to get caught up!

** After all, there's no one to cast rez on our Paladin if HE collapses from exhaustion!