Get Artix in Super Smash Bros

Vote for Artix to Appear in Nintendo's New Game!

OMG! We have a chance to get Artix added into Super Smash Bros. for Nintendo 3DS/Wii U! This is a for a new contest sponsored by Nintendo, and we're going to need everyone's help to do it! Vote here! 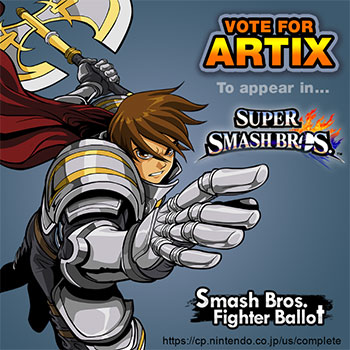 The last time we teamed up, we sent J6 (lead AQW artist) to Space Camp. What do you say, heroes? Should we send Artix to the 3DS and Wii U?

VOTE if you want Artix to appear in Super Smash Bros!