You’ve fought enemies across multiple different universes, learned to harness the unstable energies from their worlds required to stop them, and earned the right to call yourself an Ultra OmniKnight! Channel powerful auras from their universes through your trusty weapon to ultimately control the ebb and flow of battle. 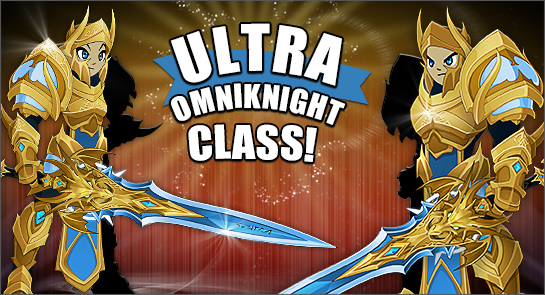 In order to best enhance your own magical abilities, consider using Wizard or Spellbreaker enhancements for damage, Healer for added survivability, or Luck for extra critical hit damage.

How to Get the Ultra OmniKnight Class!

You can buy the class (and all the extras for once) from Ragnar in Battleon OR when you talk to Loremaster Maya in Ravenbreak until the class goes rare around our NEXT Birthday. However, until the birthday event closes on November 13th, you will be able to EARN the class and all the extras completely free! BUT before you can begin earning the class... the good people of Lore need your help taking out Vaxen's army!

Get the war meter to 100% to unlock the Ultra OmniKnight farming quests (NOT daily), then talk to Loremaster Maya to begin slaying away! There are no dailies this time, just a little effort and you can earn the class as fast or slow as you want! Members get the added bonus of being able to earn the class  THREE TIMES faster than non-members.

Just REMEMBER, the chance to earn the class is a special bonus for those of you who were here to help celebrate AE's 13th anniversary and AQW's 7thth birthday! Once the birthday event goes rare in 1 month, then you will no longer be able to earn the class. Don't Worry. 1 month is PLENTY of time for anyone to earn it.

Ah, it’s just a simple auto attack, right? Wrong! Though you wouldn’t initially think it, a skill so seemingly insignificant that you don’t even need to tap it is literally the most important tool in Ultra OmniKnight’s arsenal. Depending on Inverted Light’s sword aura, this auto attack can dish out some seriously crazy damage or allow the user to survive prolonged periods of time. And if that isn’t impressive enough, it also deals 150% Spell Damage! If this was ice cream, it would be awesome flavored ice cream with extra awesome exploding magical sprinkles on top!

This skill acts as a  safety cushion for Ultra OmniKight. The stacks from Inverted Light take a while to build up, and sometimes you don’t quite have time to wait for that Heal Over Time to accumulate. Grand Sweep lets you get on your feet by weakening enemy damage and giving you time to stack those auras. Whether you’re trying to suppress enemy damage just long enough to knock it out, using the damage mitigation to cling on to those last few health points, or simply trying to dish out more damage so whatever you’re fighting dies faster, you’ll find that Grand Sweep brings a lot to the (round) table. And if Invictus is active, you can even loop the effects of Crushed so that it never fades!

Rank Needed: 2
Mana Cost: 45 Mana
Cooldown: 20 Seconds
Type: Magical
Description: Magically enhance your sword with powerful auras. Calling upon the power of light applies Resplendent Aura, a Heal Over Time that grows stronger as you attack more. If Invictus is active, you instead call upon the power of shadow and apply Destructive Aura, increasing your damage output with every strike.

Remember how I mentioned how the auto attack is what really makes this skill shine? Well, this is why. Inverted Light allows Ultra OmniKnight to be one of the most flexible, efficient classes in AQW. Looking to deal raw damage? Try keeping Destructive Aura active for 20 attacks and you’ll see high numbers flying. If you’re in a tough boss fight and your only goal is to survive, apply Resplendent Aura and stack up the Heal Over Time combined with Grand Sweep’s damage debuff to keep yourself around. One thing to note, however: Destructive Aura and Resplendent Aura cannot be active at the same time. If you want to deal damage, you don’t get to heal. And if you want to heal, you have to sacrifice your damage. Luckily it’s easy to change auras, and knowing when to switch auras will be the key to using this class successfully.

Rank Needed: 3
Mana Cost: 30 Mana
Cooldown: 15 Seconds
Type: Magical
Description: Your will is unconquerable, as are you. Draw upon the empowering forces of multiple universes to increase your haste, crit chance, and crit damage for 10 seconds.
Note: Increases Haste by 30%, Crit Chance by 20%, and Crit Damage by 10%.

The biggest thing to remember about this skill is this: Using Inverted Light while Invictus is active will apply Destructive Aura. If you’re trying to heal, do NOT use Inverted Light until this skill fades. As for this skill itself, the haste and crit boosts are both hugely welcome buffs. The haste boost increases your auto attack speed so auras stack quicker and allows you to loop this skill and Grand Sweep so their benefits never fade, the crit damage boost increases your overall damage output, and the crit rate boost increases damage and the amount of mana you will ultimately recover. Pretty much the only time you shouldn’t be using this skill is when you’re trying to apply Resplendent Aura.

Rank Needed: 5
Mana Cost: 40 Mana
Cooldown: 35 Seconds
Type: Magical
Description: Channel the aura enhancing your blade and instantly release the power accumulated from your attacks in one concentrated strike. If Resplendent Aura is active, consumes stacks of Recovery and massively heals the user. If Destructive Aura is active, consumes stacks of Devastation and deals massive damage.
Note: Consumes Destructive Aura and Devastation, or Resplendent Aura and Recovery. If no aura is applied, this skill will deal 0 damage.

Omni Blade really ties the class together. If you want to change auras and time everything just right, or happen to have some spare mana, you can make the most of your current aura stacks before resetting back to 0. If you’re barely hanging on in that tough boss fight but need just a little bit more time, this skill can bring you from the brink of death to nearly full health. If dealing damage has gotten old and it’s time to heal, you’ll certainly go out with a bang if you use this. The cooldown may seem long, so be sure to stack your auras really high to take advantage of all the benefits this skill can offer.

Note: there is currently an invisibility bug with the original Omni Blade skill, so it has been replaced with the Omni Attack's abilities until our coders can look at it on Monday.

When it comes to allies, the first that come to mind are healers like Acolyte, Oracle, and Paladin Highlord. With their support, Ultra OmniKnight never has to switch auras to heal and can consistently deal high damage. Alongside healers, Ultra OmniKnight also appreciates extra damage mitigation from classes like Chaos Slayer, Berserker, and Naval Commander to avoid receiving too much damage. Arachnomancer and Archfiend can weaken enemies and massively increase the damage Ultra OmniKnight can do, while Bard and Legendary Hero provide more consistent stat boosts.

Though it can deal more damage per second than most other classes, Ultra OmniKnight can also serve as a tank. For tough boss battles, classes that deal a lot of damage with minor utility roles such as Alpha Omega and Evolved Dark Caster make excellent allies, allowing Ultra OmniKnight to serve as the dedicated survivor class if they cannot last the entire battle.

HUGE thanks to Pisces for designing such an AMAZING class, to Memet for the AMAZING Class art, and to Dage the Evil for the EPIC sword art! Check out what some of our players are saying about the class!