Today we'll be releasing Artix's love story - "Love's Eternal Curse"! It's filled with comi-tragedy, epic battling, new faces and old... and an ending which will take a long-standing tradition and give it a new lease on life.... and love!

Are you ready for a HEART-y helping of event rares? There'll be an event rare shop featuring both Player Suggestions and art by the AQW team's artists! It will be stocked with AC items, member-only items, and we think you'll LOVE what you see! (And they won't break your heart... or your bank!) Free-player gold items will drop from the monsters and repeatable quests! 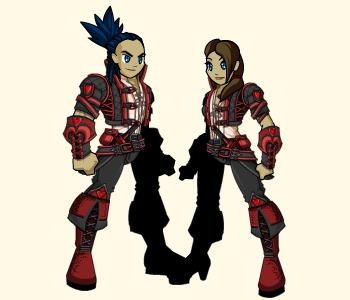 And if you're missing your favorite Hero's Heart Day releases from previous years, never fear! We'll be releasing all of those on Tuesday, February 14th!

Quibble Coinbiter's shop in Battleon will get some fresh, rockin' new gear today, as well, so be sure to check his shop! And don't forget to grab your Golden Cheezburger from Cleric Joy, the 3rd I Can Has Mod contest is almost over... who will get their wish granted THIS time?!

The curse affecting the characters in this release did not stay in-game! We're all feeling it's effects as it tries to keep us from releasing! Between people being sick, files not working as they should, and Flashing continually crashing (TEN times in under an hour!)*, the curse that's keeping true lovers apart... is also keeping us from release!

We'll battle on towards an unbroken release (and unbroken hearts!), and we'll see you all tonight!

New video posted... and MAJOR announcement! Watch and follow the link at http://AQ3D.Artix.com/