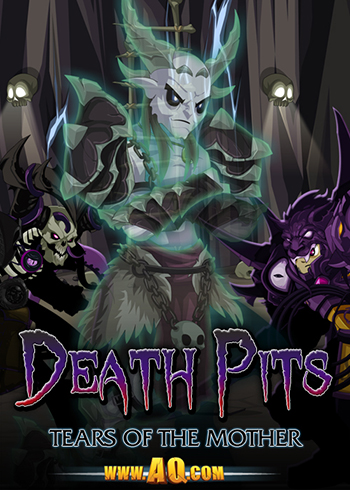 Flip-Flop Sock (but NEVER at the same time)

Not A Mod Class

As you probably know, LOTS of people ask to be made into Mods. Most of them don't know the secret to becoming a Mod. They don't really even know what they are asking for since most of them want to be Devs instead of Mods, but it's simpler to lump us all together.

A few years ago I got asked so much that I went to a t-shirt store in the mall and had a shirt made saying "No, you can't be a Mod" so I could wear it to DragonCon and save me answering people there.

Now, years later, people are STILL asking so we've decided to make the shirt for HeroMart so you can spread the word. The cool thing about the shirt is that it's such an inside joke that most people will just read it and wonder what it means, but those who get it will laugh.

The shirt, available now on HEROMART.COM, comes in your choice of Green (like the original) or Black (like the empty bits in space). It comes with the Not A Mod Shirt Achievement Badge for your character page and THREE in-game items.

Most of the questions I've been getting are about the class and how awesome it is.

It isn't. If it were awesome it would be the Yes, You Can Be A Mod shirt. It's a silly class just like the other items. At least that was the idea. As it turns out, it kind of does rule.

NOT A MOD CLASS SKILLS BREAKDOWN

It's got jeans and flip-flops, just like me (in real life). It's a very simple single target, Warrior based class and i had a LOT of fun with the skills (even the icons). The whole concept of the Not A Mod class is just being a normal gamer, instead of a hero with a great destiny or an all-powerful game Mod. 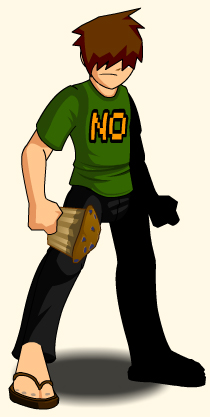 This is a completely average hit which does perfectly normal damage.

You're not a mod. What were you expecting? Super powers? LAWLZ.

I'm a gamer but i have all kinds of friends. I'm sure you have one like this. They don't play games and when they try they look like a duck trying to land a 747. They don't actually use the controller to play the game, they just randomly mash buttons in a frenzy. The thing is... somehow, this often works. Especially for non-gamer girls who play fighting games. Don't ask me why.

This is the first single skill that has a higher chance to crit than others without consuming any kind of stack. (not counting guaranteed crit skills).

You're probably fighting a monster. Why wouldn't you panic? Doubles haste so you can flap your hands at the thing for a while.

If you found yourself really transported into AQW, then came face to face with a real dragon... do you think you'd actually fight it? Are you mental? You'd flip out, maybe faint and almost certainly need a change of pants.

This a cheap haste boost that you can basiclly spam. Love it.

You get the benefits of both the Fight AND Flight responses at the same time. Lucky you!

How do heroes handle all this fighting all the time? Take a few pills and you'll feel better. Casts a heal over time and reduces incoming damage for a little while.

Hero's get beat up a lot and just keep going like nothing happened. Normal people need aspirin when they stub their toes.

This is a nice HoT (Heal over time) and the damage resist buff is nice. 20 seconds may seem long until you realize how often you are using Freak Out which cuts your cooldowns.

After some online research you now know some weak spots on the stuff you're fighting. Increase Crit by 10%

Starting to get the hang of living in Lore after all your freaking out and hand flapping, are you? Just a solid crit buff. Can't complain about that.

The descriptions are silly but as it turns out this is a pretty decent single target class for boss farming or Group PvP. I wouldn't use it for 1V1 since it doesn't have a big alpha strike ability,

We have NO idea how well these shirts are going to sell, but we can't afford to keep reprinting them forever so this class counts as a Rare. Check it out on HeroMart now!

Tags: Not A Mod Class, Cysero,