This Friday, the EPIC conclusion to the TMBG event!

Space, Time, and Portals! What could go wrong? EVERYTHING! I hope you've packed your towels, you hoopy froods, because you're going on an adventure WAY back into the past and FAR into the future this Friday! 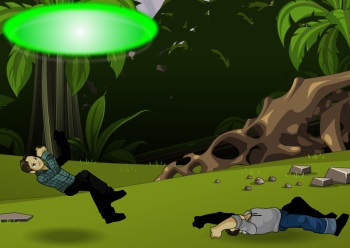 The dinos in this time period will make you really saur, so grab the nearest club or leg bone and attack back! After rockin' the dino-age, strap on your highest-tech gear, because you're going to be BLASTED through Time and Space into... 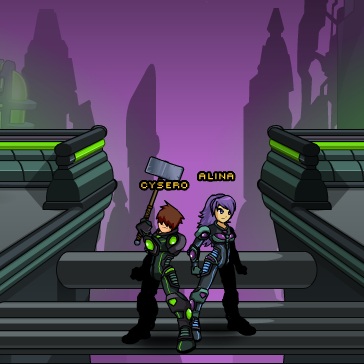 An otherworldy, alien futurescape! The Shadow-eyes are watching, always watching, never blinking. If you can evade them AND battle the alien guards, then MAYBE you'll reach your objective before The Collector. It's up to YOU to get everyone home and in one piece... but NOT as a piece of the Collection!

And don't miss the ALL-NEW even AWESOMER items that will be released this week! (Including 2-3 new houses, armors, weapons, and more!)

The Vindicator of They Class is coming THIS FRIDAY! If you haven't read about this Class yet, take a look at the Design Notes I posted here! With a look at all the crazy skills we've made for the class and the news that there will be TWO new skill animations, this is a Class you won't want to miss, because before long, it'll be as RARE as anything The Collector has!

But YOU can get it for 90 Tokens of Vindication OR giving Itzachi in BattleOn 2,000 ACs. Are YOU the Hero meant to vindicate They Might Be Giants?

This week we'll be updating the Treasure Chest with another awesome set of items and an armor! We don't know what to make yet, though, so why not let us know what YOU want? Post your ideas in the Design Notes thread or tell us on Twitter!

We Need Your Screenshots!

Beleen is working on a new page for aq.com and she needs your help! Can you post your most epic screenshots of any of the special events from the last three years? (Pink screenshots not necessary!) Post all your awesome shots here! 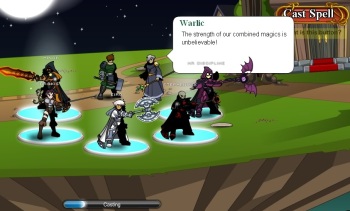 Which monsters are the most EPIC?

We have ANOTHER special project we're working on - this time with Yergen's help! We need to know which monsters you think are the scariest, most awesome, craziest, grossest, whichever you feel are the monsters that best represent AQWorlds, please post them here! 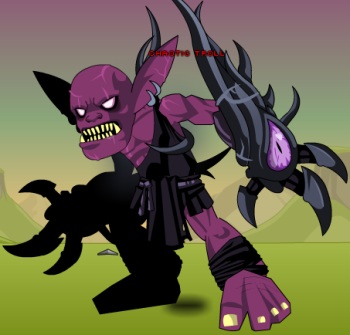 This Mogloween is going to be... DELICIOUSLY* frightening! Insanity, death, and... CYSERO?! How does THAT make sense? And what could THIS art possibly be for?!

We're working on Mogloween even as we drive home the last pieces of the They Might Be Giants event, so get ready for a week of epic awesomeness followed by a week of terrifying insanity! It's all coming up in AQWorlds before the end of this October!