Getting To Know ArcAttack's Guitarist!

Only THREE more days until the ArcAttack Musical Event on Friday! We are teaming up with ArcAttack to feature an Event Rare shop absolutely packed with powerful electrical-themed equips like:

But that's not all! There will also be 5 voice-acted cutscenes and a member-only backstage area after the event!

Yesterday we showcased ArcAttack's robotic drummer, King Beat. Today we are excited to introduce to you... Joe! He's a Doctor of Deadcanics and has a PhD in Power Transformers.

He's combining his knowledge of electricity, music, and magic along with the other members of Arc Attack to take experiments in undead technology to the next level! 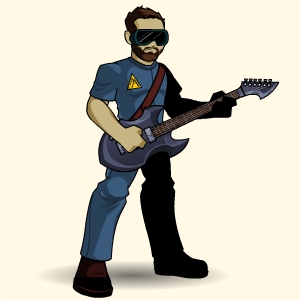 He LOVES fooling around with frequencies and sound. We're just lucky he hasn't learned how to turn his experiments sentient, or you might be battling waves of sound instead of waves of undead!