The final showdown that no one will ever forget

Sepulchure. He is the most powerful and legendary DoomKnight. He unified all of the villains in our world. He slew the good King Alteon. He even slew DEATH itself! He started the zombie apolcoypse and wiped out every living person in he world... EXCEPT FOR US! ready  your weapons and spell books friends. Now begins the final battle. We are all that stands between Sepulchure and the Champion of Light. No matter what happens tonight... our world will NEVER be the same again. BATTLE ON!

You know... I did not think Moglins like Twilly, Zorbak and Quibble could be zombified. Guess we were wrong. I was wrong about a lot of things. For example, last night on Twitter a player tweeted me: "Hey Artix! Would you do if you came across a pink derp zombie?" To which I replied, "OMG!?!?!?!? WHAT!?!?! WHY! WHY!" (It may not have gone exactly like that... but the tweets already scrolled off my tweetdeck so this is how I remember it.) The rest of the team, seeing this, thought to themselves... "Wow! What a great way to thank Artix for giving us 5 cutscenes to do in only days!" and actually started making these nightmare inducing, therapy requiring, why... why.... oh why would you do this to me, pink derp zombie armors. I love the team, and will not begrduge them the joy of watching me cower under my desk, tweeting on my phone in fear of these pink abominations. But if you start sending me screenshots of pink derp zombie player hordes... I... I.... I am actually to horrified to think about this any more O_O

The DeathKnight armor will be released tonight too! Check out two posts down for the full skill breakdown. Cyero's goal was to create a class which was damage-over-time over kill! It should be interesting, fun and very different from our existing classes to play.

Thank you to everyone who posted a caption on Daimyo's Facebook (Which now has over 2,000 likes!) Did you hit like yet? He loved ALL of your funny caption suggestions.  Great job everyone! to celebrate his birthday, you can get the Daimyo pet for only on da.... *what is that boy?* ... ARF! *Really? ... ARF! *OK, you are the birthday puppy.* .... you can get Daimyo this weekend. He will dissapear from shops for another year and the merge shops to armor him will return on Monday. 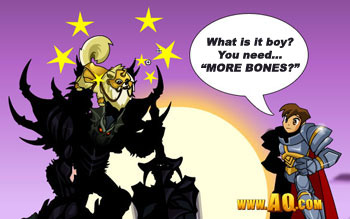 Become a Member and Support the Game

If you have been enjoying AQWorlds and our weekly releases, please support the team by becoming a member.  Not only will you be paying for the servers and keeping our coffee machines powered, you will also get an ever increasing number of in-game features and perks as a  thanks for making it possible for the team to grow the game and make it better each week!

P.S. - In preparation for the release of Alchemy in 2 weeks, alchemy reagents have started dropping from boss monsters. Stock up on them!

UPDATE: Responses from the Grand Finale!

We give it our all every week. Not Friday gets a reaction like this... but one glance at the comments below shows why it is all worth it. Thank you!!!!!

@WonderpBread says, "AE Never fails to satisfy! Well worth the wait! :D BATTLEON!"
@Gjappy says, "you guys did an exellent job with this release!!! *summons you a BIG cake*"
@cyromansor says, "The cutscenes were amazing! *tear of joy runs down cheek* I loved the release to pieces!"
@J1KTheGamer says, "im not one of those crazy fanboys that like everything but THIS RELEASE WAS AMAZING!"
@Cryoskylos says, "1 word after finishing the release....mind blown o.o"
@rinreos says, "same here i luv it :) its so awesome i finished it too, i so liked it :)"
@JasonShadoesky says, "Best...twists....ever...FREAKING AWESOOOME"
@_Neeko says, "clever Aerosmith reference in The Ultimate Horror's description xD"
@AngryAwesomeGuy says, "Release was epic."
@KingJulian says, "ARTIX THIS IS INSANE! THE RELEASE ITS INSANE INSANE I TELL YOU!"
@Brisingr says, "That was a short release, but the cutscenes @Samba_AE rocked them out hardcore! Loved it, definitely looking forward to more!"
@AlphaConduits says, "This release is soooo mother flipping awesome."
@Suskelani_AQW says, "That. Was. UN-MAZING!!! Un-mazing? Get it? *no response* Err, i'll stop now.. That was amazing! Good work to all!"
@DeitylinkAQW says, "THE MOST EPIC RELEASE OF MY LIFE! I can't wait til you can top it!"
@ZeMageAE says, "MOST EPIC RELEASE EVER!"
@Fried_Ryce says, "Those cutscenes, one word, 4 letters, EPIC."
@Excavator_2 says, "OMG!!! Awsome!!! You have done it again, outnumbering your previously cutscenes! I don't think I will ever stop playing."
@QuantumInsannity says, "OMG!! Sooo many great cutscenes and bosses and everything. But... still don't know what champion the "hero" is! Love it!!!"
ShadowRavena says, "Okay then, thanks. And btw... best release in AQW history!"
@Slimjim1516 says, "OH MY GOSH!!!!! That release WITHOUT A DOUBT is one of the BEST releases EVER!!!!! Seriously, it was AMAZING."

Note: We updated the map so it is easier to get the to the boss fight and replay the cutscenes. Once you have completed everything... there is now a simple menu that will let you replay all of the cutscenes and re-battle Dark Sepulchure. Battle On!

Tags: Artix, Sepulchure, Daimyo, DeathKnight, I am scared of the color pink why oh why would the,