Information on the Go

Here's what you need to know!

We've got a LOT going on behind-the-scenes and right in your faces (or monitors)! Here's a information breakdown of what we're working on, what we're planning, and what we've got lined up for the soon-to-be-present.

Find your nearest Target store location and get moving, because Artix Gamecards are in stock! If you redeem your Artix Gamecard before August 31st, 2012, you'll unlock the Bullseye Spear bonus item in addition to the Artix Points! Those points can be used to purchase AQWorlds membership or Adventure Coins!*

Think you can hit the Target's Bullseye with this powerful polearm?

* Follow the steps listed here to unlock your Bullseye Spear, but you'll look for the Bullseye achievement in your Book of Lore instead of the Flamestop.

Having a goal is important in life, whether it's to win a Gold Medal in a sports competition or to get that shiny gear before the shop leaves! To celebrate the competitive spirit and working hard to achieve your dreams, we're opening the Lorelympics Shop! 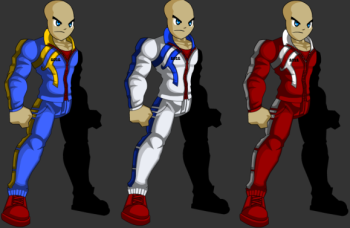 It will be stocked with sports-themed gear: color-customizable Track Suits (3 colors to choose. Why not use your country's flag colors?), Gymnastics outfits, a Lorelympics Flame Mace, the PvP Medals, and more!

Female Gymnast armors will sparkle.
The Male armor will not.

The Lorelympics Shop is in Battleon now, and will stay for a week! More gear will be added to the shop on Monday!

When the war ends, we'll release:

What stays after the war ends?

We've mentioned this in previous Design Notes, but we get thousands of new players each month, and new news is better than old news, even if it's the same news.

The following war content will stay after the war ends:

The following war content will NOT stay after the war ends:

** These have not been decided yet. Let us know which you'd like to remain available!

Please remember: We will NEVER ask you to pay us or give us your personal information to become an in-game moderator, developer, or admin. The ONLY people who have the power to offer those positions will email you using an @battleon.com email address, and we will never do it over Twitter or Facebook.

Note: We will also NEVER ask for your passwords, phone number, credit card infomation, etc. We don't need those things to help you or give you mod powers.

The Dark Caster Class is in development and will release as soon as its ready. Please remember, the ONLY people who will be able to access this class are players who bought the Dark Caster Armor from Dage the Evil's 2011 Birthday shop.

The Dark Caster X armor (bought from the Dage War Preparation shop) does NOT give you access to the Dark Caster Class. The class was promised to those who bought the original Dark Caster Armor.

If you're keeping an eye on the Artix.com Design Notes, where Artix shares news about AE and the new AQ3D: Legends of Lore game we are developing, you might have noticed him spilling the beans about a few projects we've got going on. Some of you have been asking about them, so here's what's in the works.

Who knows what news Artix will leak next? (He's SO BAD at keeping secrets!)

Reens, the Lead In-game Moderator for AQWorlds and HeroSmash, levels up today in real life! We wish her much cake, many presents, and a LOT of peace and quiet. If you want to give her a present, why not go in-game and help a new player battle that boss they're having trouble with?

PS: Members: It's August 1st! Make sure to visit Twilly to get your two FREE treasure chest keys!