This past weekend I entered a competition where the goal was to make a game in 48 hours, by yourself, from scratch. Rolith talked me into it. He created a game for it too! The theme of the game competition, "Discovery", was announced on Friday at 9pm when the competition started. You might be wondering why on earth I would go home after a intense 5-game release week and immediately jump into 48 more straight hours of game making? (Well, probably not -- you guys love games just as much as I do) Truth be told, most of what I do now is leadership... not hands-on production. Zhoom, Minimal, Captain Rhubarb, Rolith and the other programmers are all so much better than me that I do not get to code any more. J6, Thyton, Ghost, Miltonius, Cysero, Tomix, Oishii are all such incredible artist/animators that I do not get to draw any more either. So when Rolith told me about this contest something sparked in my heart. I WANTED TO MAKE A GAME!  So I streamed my screen so people could watch and used a program to take pictures of my screen every minute. I created a game called... DOOM CAULDRON

The most difficult part was that I was running a fever of about 100F Friday and Saturday. Honestly, I would have announced where I was streaming my screen so you could watch me work to everyone except I did not want you to see me fail if I became more sick and had to stop. (I think Beleen's ultra pink Birthday infected me) I created everything in the game during the 48 hours... the Art (mostly photos... my house has an usually high weapon/armor to room ratio... and some pictures I even took of myself using the cameras timer! Note: It is amazing how quickly a Bathrobe and a little creativity can create the "Necromancer" look!), Sound FX (mostly of my toilet), Music (I only had 15 minutes and had to play something on the guitar FAST.. better than nothing!), and of course the code (Any real programmer would cringe in horror... horror!) I feel the games hits the theme of "Discovery" dead on. You drag and drop items into the cauldron and hit create to see what it makes. The ultimate goal is to create... THE DOOM KNIGHT. If you are wondering... why would Artix make a game about a an evil undead conjuring cauldron? The answer is: You know Daimyo and I love battling the evil forces of the undead. I am training Necromancers on how to create undead armies so you can send lots and lots of undead for me to battle on Frostval! (Santa always says no.) Well, are you ready to play... DOOM CAULDRON 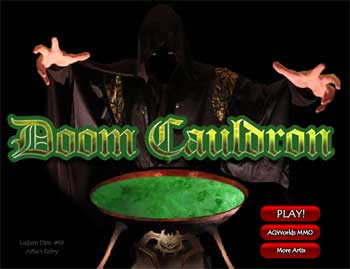