Dragon*Con does NOT Drag On!

It can't, because it NEVER STOPS. It's 1:46AM and Yergen, Rolith, and I are sitting around relaxing and going over the AWESOME panel we hosted earlier today. But first, let's go over the AQWorlds release before I either fall asleep or fall into the middle of a conga line of StormTroopers. Both options are equally as likely to happen.

That's right, a mystery villain has kidnapped you and dropped you at the bottom of a volcano! He doesn't want to have to deal with you because he KNOWS how much trouble you were the LAST time he dealt with you.

That's right. You've tangled with him before. But not in AQWorlds. Good luck taking on his fiery, furious riddle-laden dungeon crawl. I mean it. You better hope you're lucky, because he is INSANE.

20 floors of battling on will have you in a frenzy of flame-laden fighting until you reach the top... and FREEDOM!

We're all at Con. Working. Yep. Working. (And playing. It's a company retreat to learn, meet players, and recharge our creative batteries.) So we will get the functionality for the 2 free Member Keys working once we get back to the Lab on Tuesday.

We have already had SO much fun, and met so many awesome players! Aeonarial, Practel, CrystalStar, and so many more came to our Player Pizza Party! We destroyed 30 pizzas, had a lot of laughs, and got a lot of great ideas for AQWorlds!

Today's panel was AWESOME! We announced 3 VERY big announcements which I will let either Artix or Cysero tell you next week. (Unless you hear it on Twitter or the forums from someone who was here.) Voltaire came and performed live. We gave away calendars and Zazul threw a LOT of candy at people.

It's 2AM. Rolith and I are going to go find Trouble. (When Cysero is involved, the word uses a capital T.) Trouble will likely include a Wookie, a superhero, and possibly a Hynotoad. We'll have to see!

The Tower Of Necromancy

This Friday, the story of DoomWood continues as we head to the Tower Of Necromancy where questions will be answered, wits will be tested, old characters will re-appear and NECROMANCER CLASS will be obtained.

As you may remember from my last post, there will be TWO ways to get your hands on the non-member Necromancer Class. The first will require a LOT of hard work. First you will need to reach RANK 10 in DoomWood Reputation to purchase some materials that will be required to unlock the class, Next you will need to farm the Creature Creation for a not-very-rare drop, and lastly you will need to reach the top of the Tower Of Necromancy in the heart of DoomWood Forest.

The maniacal master of the tower will test you, and if you are able to reach the top of the tower, you will be able to unlock and equip the powerful Necromancer Class!

The other option is to buy it with AdventureCoins. Zorbak, who is always looking to cause trouble, will offer to sell an AC version of the class for 2000 ACs. This AC version of the Necromancer Class will also be added to Quibble's shop for the duration of his stay (at least one more week). Once he leaves, you will still be able to buy it from Zorbak or earn it from the Tower. Or both,

but no reason for that since they are completely identical other than price.

The top of the tower will also sport some necrotic weapons and some member only options for Necromancer like a Color Custom version of the base armor and hood... 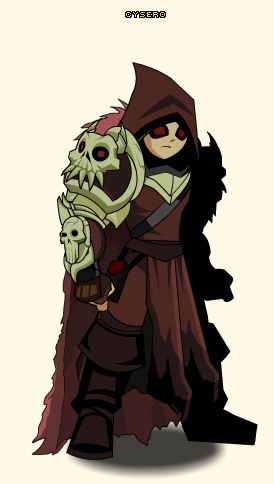 Or purchase the member only Necrolock robes and hood, also for gold. They are not CC but they're still quite lovely.

Meanwhile, back in the AE Underground lab... Yorumi is still hard at work building this innovative new type of class. Our aim is to allow you to command a new type of pet called Battle Pets to do your bidding. Most of the class skills are buffs to the pet's damage or haste, but other skills will allow you to regain mana or life through pet attacks.

The class SHOULD come with a very basic version of a Battle Pet built in (a skeleton in this case), but later we want to open other Battle Pets to the game for member-only purchase (there might be a few very very very rare cases where we might offer non-member or AC Battle Pets but not often). THESE Battle Pets might even come with their own signature skill, unlike the base pet that comes build into the class.

There is still a long way to go to make the class function the way we would like it to, but as soon as I have some solid skills ready for balancing I will give you guys a skills write up.

Meanwhile, back in the AE Underground lab... Artix is single-handedly planning out the levels of the tower, trying to create a unique challenge for you. You will be required to take command of several skeletal minions and move them across the room to reach a lever. Once you acomplish this task, the platform will take you one level higher in the tower. Sounds pretty simple, right?

Meanwhile, back in the AE Underground lab... Zhoom, being the clever code monkey that he is ,believes that he has found the recent source of massive lag in DoomWood. He could be wrong but he has, to my knowledge, never been wrong about anything else. Ever. We will continue trying to track down some of the pesky quest bugs in that area as well. We will be applying those fixes as the week continues.

AE is going to more conventions than EVER this year. Granted, we are mostly going to ones we can drive to in under an hour but still, more is more, and we would LOVE to meet you guys.

E3: THIS WEEK Artix and Titan will be heading to the E3 (The Electronic Entertainment Expo).

It's not really a convention but more of a big annual trade show for the computer and video games industry presented by the Entertainment Software Association.

There, they will rub elbows with some of the industry greats and also get to play with some of the worlds coolest toys. E3 runs June 7-9 and we don't have a panel or booth but if you happen to be in L.A., get a chance to visit the E3, and know what Artix or Titan look like... say hi!

PARIAHCON: Then, this weekend Artix, Nythera, Thyton, Jemini, Korin, me and a few other members of the AE staff will head to Lakeland, FL for PariahCon 2011.

This one actually IS a convention claiming to be Lakeland's first anime/gaming/collectible convention. Considering that Lakeland is a wonderful but only mid-sized town with roughly 584,000 people inhabiting it, that comes as no great surprise.

We will have a panel, Artist Alley booth AND a booth at this one. The Con runs JUNE 10-11 and our panel is at Friday, 4:00 PM in the Main Events room on the 7th floor of the hotel hosting the convention.

After our panel, we'll mostly be playing (and selling) Battle Cards at our swag booth. This WILL be a small con. If you happen to make it we'll be able to hang around with you like... all day.

METROCON: This convention is a bit larger being held, as it is every year, at the Tampa Convention Center, June 17-19.

Once again, we've got a panel and swag booth. Our panel at this convention will be 2:00 PM on Saturday then several hours of trying to follow Artix through the merch room. He vanishes like a 4 year old in a department store. POOF.

DRAGONCON: This is our BIG convention that we go to every year, and I consider to be my home away from home.As always it's held the first weekend of SEPTEMBER (Sept. 2-5) in Atlanta, GA. 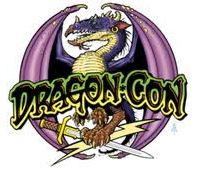 We will have a panel and that is it but we will ALSO be giving away our yearly DragonCon Pet (last year those who came out to see us helped us come up with the Steampunk Dragon non-member pet).

Our Panel is on Friday 2:30 - 5 PM. The room is yet to be decided but you will find us in your Con Guide under the MMO Track. I will also accept ALL Battle Card challenges offered at this con. Probably the others too. I will be fully prepared to sit down on the floor in the middle of a hall way surrounded by roughly 80,000 con-goers and begin dueling.

I can't speak for everyone but I utterly and completely LOVE running into players at conventions and at DragonCon especially! This is how I first met Stratos who is now one of the head Mods, as well as a number of other super-fans who came out just to attend our panel and many of them have also become trusted friends. A few of those guys have also become mods, come to think of it.

That doesn't mean that coming to con will make you a Mod, but if you're the kind of AE fan who makes the trip just to meet us (sometimes from as far away as New Zealand!), it's a pretty good bet that you're the kind of person that we're looking for to be a mod.

If you follow our Twitter feeds, you know that Alina had surgery last week. She considers it minor surgery but she also tried to work from home within an hour of being released from the hospital so that's how sane (or dedicated) SHE is.

Rolith (her husband to be... got enganged at DragonCon last year!) and I wouldn't let her. She eventually resigned herself to sleeping off her surgery and trying to heal.

I just want you all to know that she is well, recovering nicely, even spent 45 minutes on the phone with Artix talking over DoomWood plot this morning. With some luck she hopes to be back in the lab toward the end of this week.

Get well soon, Alina. We miss you at the AQW table and the halls of the AE lab are far too quiet without "There's a MAYUN in there!" bouncing off of them. (Inside joke. Ask her.)

Now, stop laughing, you'll pop a stitch, and get some sleep.