Server Rewrite Update - Back to Testing

Hello all! A few weeks ago, we took half our servers and converted them to the new system to test their stability under heavy load. You guys did a GREAT job -- by hitting the servers so hard, you revealed that a memory leak bug that looked fixed... wasn't completely resolved. 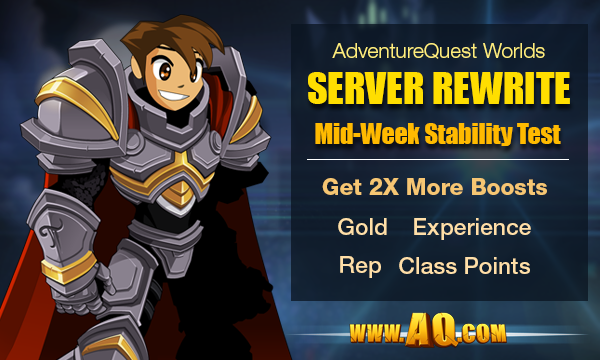 Yorumi spent the last few weeks analyzing and working on fixes for that... and now we need you to hit them hard again! To give you more of an incentive to log in and play on the testing servers, you'll find double Rep, XP, Gold, and Class Points boosts on all testing servers:

Make sure you are logging to one of those servers on this URL to get the new client with the boost: http://www.aq.com/play-now/defaulttest.asp for the right side servers

Issues to watch out for

Watch out for unexpected server shut downs. Enhancements are enabled on the testing servers now, so please check to see that those are all working as expected.

Rank 10 class passive skills are currently disabled as we check an issue with them.

Wait, what's this all about? Server rewrite?!

We've made a lot of changes to AQWorlds over the couple years, and gained MANY new players! That's great, because it means there are tons of new heroes for you to quest with, battle with, and talk to... but also puts our servers under a great deal of strain.

To make AQW the BEST game it can be, we need to take the time to FIX the current issues. So... how do we DO that? WE REBUILD AQW'S SERVERS!

For the two and a half, Yorumi (AQWorlds' lead programmer)** have been rewriting the AQW server* and we are now confident that the server is ready to release! That's why this weekend is the LAST weekend of testing as Yorumi works on the final display bug.***

With these changes, we can make AQWorlds better, faster, smoother, AND introduce new features that you guys have been requesting for a long, long time!

* the backend system that makes the game function, not what you log into each time you want to play the game.
** With the help of his assistant, M, for the last six months, and with the help of our servers testers since the project began
*** Display bugs are typically smaller, and usually easy to fix.

What I've been writing about above is Phase 1 of the server rewrite - porting the game over to the new servers. Phase 2 is where we're planning to make the changes you have all been asking for.

Once Phase 1 is complete, we can start working Phase 2 functionality like:

Those of you who have completed quests on the testing server may have noticed a new item dropping from ALL quests - the Testing Mission Sprocket! Save up 150 of these babies and you'll be able to turn them in for the 0 AC Sir Ver Bank Pet, a wicked-cool PTR testing reward!

Remember: as you find issues testing quests, killing monsters, and running around the game, please report them on the Bug Tracker!

How do I report PTR bugs?

PTR reports will be handled almost exactly the same now as reports have always been handled, so for those of you who know how, you can skip this section.  For those who don’t here’s a nice little walk through of reporting a bug.

First you need to get to the right place.

Start by clicking that link. This will open a new tab on your browser.  Go there.On that page, you will begin the very short process of making a bug report.

Choose AdventureQuest Worlds as the game being reported.

Then use the drop down menu to get to the right type of report. In this case, we want the AQW Server Rewrite. Click that and it will bring you to the report form. 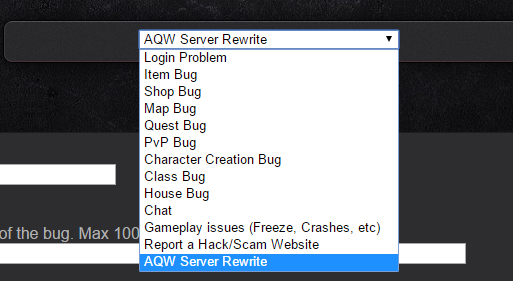 Read the full "How To Report Bugs" post here!

Thank you so much to everyone who has, is, and will help us test! We say that we build our games for and with you, and it's TRUE! We could not create AdventureQuest Worlds' weekly updates or its server rewrite without you, and I'm so excited that we are all building this together.