Hi again!  This week, let’s talk a little about everyone’s least favourite monsters, the Lag Monsters.  Now some of you may already know that there is actually more than one type of this monster.  For those that don’t, here’s a short guide on how to tell them apart. 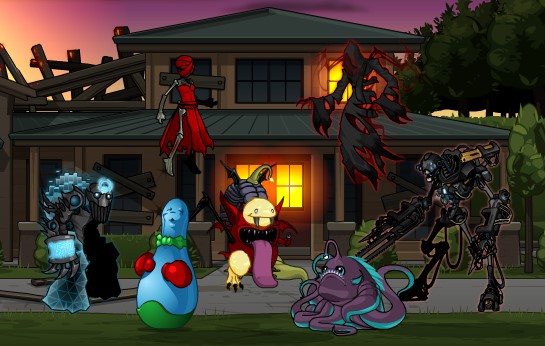 Server Lag Monster:  This monster shows up when commands are sent to the server, such as saves, buying and selling.  When a lot of them happen at once, this monster attacks.  This monster can sometimes be avoided by playing on less populated servers.

Database Lag Monster:  This monster is most likely to attack when servers are restarted, such as for updates, when everyone is trying to log in at the same time. This monster usually makes brief appearances and then goes back to sleep on it’s own.

Graphics Lag Monster:  This monster is a particularly obnoxious breed as it manifests different to different people.  It generally appears around highly animated items, or lots of action on screen.  It has been found that this one can often be tamed by a decent video card, and making sure your drivers are up to date.  Can also be affected by CPU speed.

Cache Lag Monster:  This monster is a sneaky one.  It sits around and waits while you fill up your browser with all kinds of information and then just appears and wrecks your day.  It will cause everything you do to be a little bit slower, and slower, and slower.  The good news is this one can be chased away by clearing your cache.

Tab Lag Monster:  This monster appears most often when 3 or more tabs have been opened.  It’s also far more likely to put in an appearance when those tabs have streaming content on them.  It’s like a summoning ritual.  The more tabs open = the stronger it gets. And the last thing anyone wants, is a lag monster, let alone a super strong lag monster.

Flash Tab Monster:  This is a rarer version of the Tab Lag Monster.  This one attacks when you are tabbed over, and return to the game screen.  It will either freeze your graphics and you may need to drag the tab to a separate window, or it will try to play everything you didn’t watch at the same moment.