Letter from the High LoreMaster

To the Darkovian Rulers, Village Headmen, Town Mayors, and Freeholders in the lands of Eternal Night,

Several years ago, the war against Drakath saw the Queen of Monsters freed from her prison in the Chaos Realm.

Since the Alliance was shattered, there has been no reliable organization keeping peace; many bands and would-be conquerors are taking this opportunity to rise up. Drakath himself has all but disappeared, leaving a host of Chaorrupted creatures roaming the land… and a world ripe for the Queen of Monsters to conquer.

Though many have tried, no one has been able to fathom her true plan, or predict where she’ll appear next. Rumors tell of children disappearing, countries falling into anarchy, unallied villains banding together, armies marching, and monstrous beasts rising to save (or slay) entire towns.

Now… Loremasters have confirmed reports sent in from across the world -- a host of Infernal Invaders has attacked the Celestial Realm and Doomwood, and they have been spotted marching towards Darkovia.

We do not know if these creatures are connected to the Queen or some entirely new threat.   but urge all those dwelling in or near Darkovia to arm themselves… and stay vigilant.

The night is dark and full of terrors, but our records show the Queen of Monsters can strike at any time, and any place.

Albus KetchSecretary to the High Loremaster

This Friday, return to the forests of Darkovia as this army of Infernal invaders threatens to destroy every living (and undead!) creature that roams the darkness! 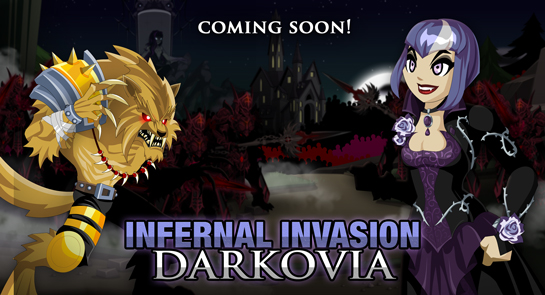