2017 is Almost Here (unless you live in the future)

It's almost time for the New Year! (Except for all you time-traveling heroes that live in the future... hey, how's 2017 working out so far?) Log in this weekend to battle through the finale of our 2016 Frostval event and starting NOW, you can /join newyear to play through all our seasonal new year events! At 6 PM EST, the 2016 celebration ball will begin dropping, and it will officially be 2017 in Lore! 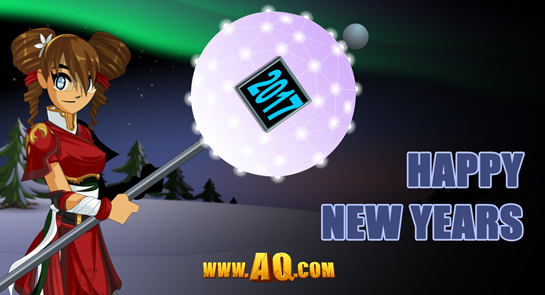 Find the New Year's rare weapons in your game menu this weekend, then head into battle in the following maps:

You have probably already noticed but the Gift Boxes have opened! Enjoy the AWESOME armor set from guest artist, Goddess, who has returned for a one-event-only appearance to help you celebrate Frostval!

The Gifts will stay where they are until the end of the week but the folks that get them NOW don't get the sheer joy of waiting to unwrap those mystery gifts.

Happy Frostval, everyone and have a great new year!

Time Marches On... And So Does Server Testing

With as much time and testing as we have put into rewriting the game's server and client, we don't want to release something you guys will say feels unfinished. Yorumi, Cemaros, and the Bugs crews have been reading and verifying all your reports and it looks like we're down to the last of the bugs you guys found. That is AWESOME!

The server rewrite will allow us to more easily change and improve the AQWorlds you know and love. Significant changes to core gameplay, however, will be coming in the mobile/omni version of AQWorlds that Artix has been talking about.

Now that I am back from vacation, Yorumi and I will meet to review what's left and get an idea of how much longer he expects.

Class Balance update: After getting a lot of feedback from you guys, I've talked with Arklen and Artix. We will not be rebalancing/reworking the "overpowered" existing AC and member classes - we don't want to change the classes you have been enjoying for so long. We will be working to bring all underpowered classes up to par with the recent classes, though, and will be adjusting monsters so that the game remains fun.

The Queen of Monsters Saga... Returns/Renews/Reforms

The Queen of Monsters emerged from the Realm of Chaos in 2014, and since then, we have had a whirlwind of craziness, huge monsters, armies, and... a bit of confusion as to what her TRUE plans are. This past fall, we saw one of her armies, the Infernal Invaders, begin attacking Lore. Their Saga has just finished... but the story isn't done!

We'll be continuing our new direction for the Queen of Monsters' story in 2017 - darker and deadlier, and I will leave you with one warning... NO ONE is safe!

Speaking of... Friday the 13th is coming around again! We should go check on Drakath in his new lair in a few weeks.

Man, so many team members are leveling up in real life right now! We've got Artix, Nythera, Aersion, and... Crulon! You'll find Crulon's birthday shop in-game on Friday, but his real birthday is tomorrow! Wish him a happy birthday and happy new year on Twitter!

This season is a time for giving but that means more than just presents. Sometimes it means just giving a little bit of your time to the people who wish we all had more time to spend together. We loved making the Frostval event for you but we also loved taking a few days off and spending them with out friends and families. I've had a wonderful vacation up in the frozen Northlands of Chicago, and I know the team here enjoyed time with their family and friends.

We will ALL be back to work on Tuesday, January 3rd, but until then...

We hope that no matter where you are, who you are or what you believe... you got to take a bit of the Frostval Spirit with you into the real world and share it with the people that you care about.

Have a wonderful holiday and a happy new year!