Bits, Bites, and Bytes of News for You

As March draws to a close, we've got a melange of things you need, want, or should know before we move into April. Read on for news, and then come back tomorrow for the April release calendar! 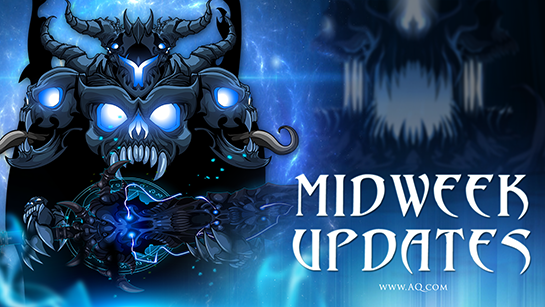 Legitimate emails from Artix Entertainment and Boacompra do not use @gmail.com or other public providers.

Make sure your AE emails are being sent from one of the following:

If you ever have questions about whether an email you've received is legitimate, please contact the Artix Help team through our Support Pages.

March is our Month of Evil, and brings with it Dage the Evil's birthday, the Lucky Day Fair, and more. All our limited-time March events will leave for the year on Friday, April 5th.

Our March seasonal set, the Legion WarSeeker, will leave at 12:01 AM EST on Monday, April 1st. It will be replaced by the Bio-War Cultist set, crafted just for you by AQW Community Artist, Noire.

Exclusive Undead Legion weapon update: @DageTheEvil has not forgotten about the weapon he is crafting just for his loyal followers. The estimated release date is the first week of April. Keep an eye out for previews in the near future.

Earlier this month, we announced plans to update the Undead Legion House with new gear and a quest or two. Those updates are still planned, and will release along with the new weapon Dage is making for the Undead Legion. (Note: the Legion House will *not* be required to get the new weapon, but will be used to unlock additional variants of the item, like the floating sword pet.)

Not Live, but Not Forgotten

A tip of the hat to AQW player Cynderella, who asked for updates on several of the projects the AQW team has planned:

These story/zone updates are still planned for the future, but will be worked in around the Queen of Monsters' finale arcs:

I had wanted to do these myself, because I think they're a very fun idea... but the universe has a way of interfering with plans. My schedule has changed enough to make this unfeasible for the foreseeable future, so I reassigned the micro-zones for last year's Achievement Tracker classes to another designer. Work on them is currently in the planning stages.

Earlier this week, the team added a 0 AC tag to the Classic Alpha Pirate Class. If you are one of the original heroes who received the class back in 2008 (during the 1st Mulligan Day) and no longer have it... GOOD NEWS! Yorumi is adding the class back to your account yesterday. If you do not see your armor on your account, hang tight. We'll be adding the rest in today.