A Nightmare's Nightmare: Rainbows and Sparkles

When a super-happy, over-sparkly calico cartoon character* takes over the Dream Network, Memet and the creatures of the Nightmare Realm are declared illegal. Writers, artists, and heroes who depend on darkness, destruction, and monstrous mayhem for inspiration are struggling to survive. Help her restore the Dream Network so that heroes who revel in gloom and doom can stop hiding from the kawaii-cuteness plaguing their home! 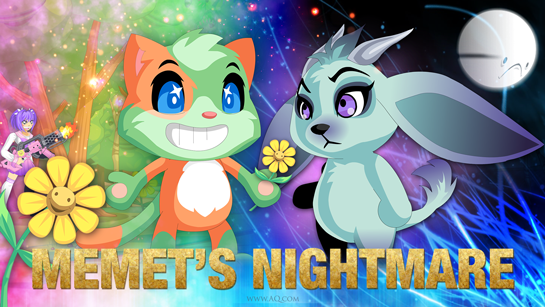 Battle the monsters in this week's event for a chance to get:

Then talk to Memet in /spookeasy to find her "Nightmare Novelties" shop with the Spookeasy Nightmare and Memet Animatronic armor sets.

* Who is clearly a fan of Lisa Frank's rainbows, unicorns, and glitterbomb overload
** The armor and helm used by the SparkleGuards are available in Vesper's birthday shop in your Game Menu.

Memet the Nightmare Moglin*** is the staff persona for Memet, AQWorlds' lead writer. She is the one who writes and designs the weekly releases you battle through. She is a huge fan of dark, offbeat, Lovecraftian/Geiger style art and fantasy... which is why she's a nightmare creature. 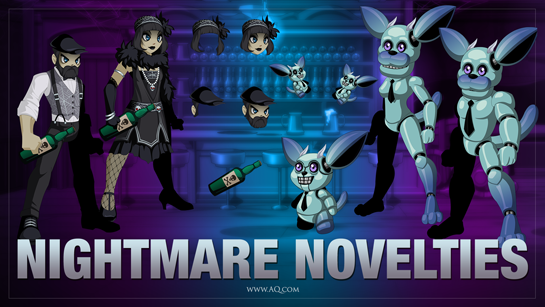 We usually celebrate her birthday in November, but because of a very joyous-but-time-intensive) special release for J6 and his wife (aka, they had little J6 2.0!), we had to push it back to give J time to do all the awesome new BG art.

*** Technically, she is really a nightmare creature masquerading as a moglin.

January: Celebrate ALL the Birthday!

Ok, maybe not ALL. But many! Our month-long celebration of team member birthdays continues this weekend with Memet's belated birthday. Last week, we celebrated Vesper and Crulon's birthdays with Vesper's Pink, Purple, and Prismatic Shop and Crulon's Djinn riddle quests.