Happy birthday AQW! The class team has ironed out the new birthday class, Lord of Order. As the Mirror Realm counterpart to Chaos Lords, Lords of Order buff multiple allies with stat increases and a modest heal, but also have an additional unique trick-- the ability to INVERT enemy damage using their final skill! 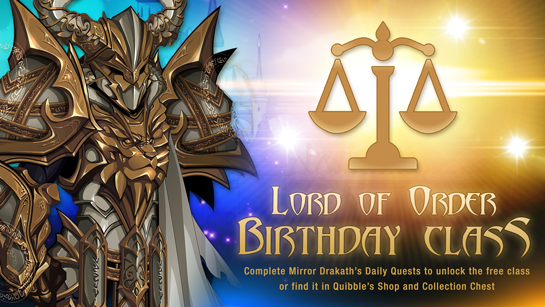 There are three ways to unlock the Lord of Order Class:

Lords of Order gain mana from all hits landed in combat, and especially on crits. The amount depends on damage relative to *their own* HP total.

Strike of Order
Attack with an enchanted weapon, dealing damage based on both attack and spell power.
Type: Physical/Magical
MP: 0
Cooldown 2 seconds

Harmony
Heighten the inner peace within you and up to 5 allies, strengthening the foundations of your combat style. Applies Empowerment to all targets, increasing Strength, Intellect, Endurance, Dexterity, Wisdom, and Luck by 20% for 10 seconds.
Type: Physical/Magical
MP: 20
Cooldown: 8 seconds

Ordinance
Purge corruption from yourself and up to 5 allies, healing everyone for a small amount. You return to battle with new strength-- applies Resurgence, which increases all outgoing damage and reduces all incoming damage by 30% for 12 seconds.
Type: Magical
MP: 20
Cooldown: 12 seconds

Axiom
Cast a veil of magic that greatly heightens the focus of yourself and up to 5 allies. Applies Clarity, which increases haste by 30%, and hit chance and critical hit damage by 40% for all targets for 8 seconds.
Type: Magical
MP: 20
Cooldown: 8 seconds

Blessing of Order
Bestow the unrestrained power of order onto your enemy. Applies Quixotic for 4 seconds, causing enemy attacks to heal instead of dealing damage, and Stability for 25 seconds, which prevents Quixotic from applying. Also applies one stack of Order for 15 seconds, which decreases enemy outgoing damage by 8% and stacks to 5.
Type: Magical
MP: 30
Cooldown: 8 seconds

Servitude: Increases Haste by 20%
Resilience: Decreases incoming physical and magical damage by 15%
Oath of Order: Starting at rank 1, all attacks result in critical hits and can never miss.

Class Design and Use

This class was designed with the primary goal of supporting allies in mind, similar to classes like Bard and StoneCrusher. Its most notable buff is a +30% haste boost for the entire party, something only StoneCrusher could previously do. Lord of Order can also be used in conjunction with existing support classes with minimal buff overlap, as few classes provide group hit chance and critical hit damage buffs. When combined with classes that have high critical hit modifiers or classes that boost critical hit chance, the results can be devastating.

Additionally, this class occupies a sparsely-populated niche in PvP as an anti-dodge tank-- because its auto attack and final skill always result in critical hits that cannot miss, it ignores dodge boosts from classes like Great Thief, Chrono Assassin, Horc Evader, and the rare Blademaster series. When the aura Quixotic is applied to an enemy from the final skill, all their outgoing damage will heal enemies for four seconds-- when combined with its haste boost and low-cooldown heal, this class can outsustain many classes that fail to deal significant damage or carelessly use their strongest skills while affected by Quixotic (hint: in a group PvP where combat is ALREADY chaotic, your enemies may not realize you applied Quixotic until it’s too late). One drawback to Lord of Order in 1v1 is its mana sustainability, so stock up on mana potions if you’d like to increase your chances of winning!