Battle For the Lair Continues

After three weeks of intense war combat, the team and I wanted to switch things up a bit, give this latest war a different feel. But  the feedback from many of you was that the new war meter was confusing, so we've reverted the displays back to the original system.

NO war waves were lost in the conversion; we are now simply displaying the values in the old, easier-to-read way. As of this writing, the Alliance is holding strong with a 2% lead over Chaos (21% to 19%).

If you are upgraded and support the Alliance, you can also complete the quests in /ChaosNorth to recruit Xan. Those quests also raise the Alliance war meter! 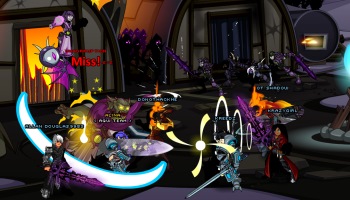 Have a great Saturday, and enjoy the rest of the battles! Don't miss this week's latest additions to the war merge shop, and make sure to check out the gear in the Summer Shop (find it in your game menu)! The next batch of Aranx's summer gear will arrive on Monday, so if you've been hungering for some new hair-style helms, you're in luck!