New Daily Quest to get the Armor and Helms 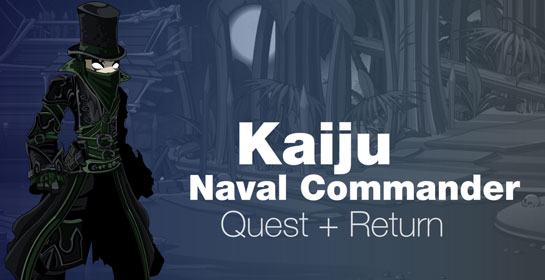 A quest to get the gear released earlier tonight, but we had few handfuls of players turn in the quest and *not* get the rewards due to lag. While that's not many, we don't want that to happen to anyone else (or for anyone to feel like they need to buy the AC version of the Class again).

So, the new daily quest to create the Kaiju Naval Commander armor and gear is live.

To the 1,347 players who got the armor and helms already -- congratulations! Your luck was in. Your fellow heroes will join you in manning the Kaiju Corsair Crew in a few days.

* The 0 AC version of the Class will not work with the quest.

You will no longer need to turn in your Naval Commander Class to complete the quest.

If you turned in your Naval Commander Class to complete Friday's "class exchange quest," Yorumi just added the 2k version of the Class back to your inventory, set to rank 10 (as our way of apologizing for the inconvenience.)

If you purchased a 2nd Naval Commander Class after turning in the quest, please write in to Player Support using the Help Pages and they'll refund your purchase. Contact them using this form.