Appearing on the Homepage Starting Monday!

Joining a Guild, building a town to defend, and going on epic quests with your Guild members to rank it up are going to be some of the most awesome parts of the Guilds feature. Yorumi has already started work on how the Towns/Halls will function.

As he continues working towards that goal, we want to shine a spotlight on the epic Guilds which already exist in AQWorlds! And that is why, starting next week, every Monday we'll feature one new Guild on our homepage! 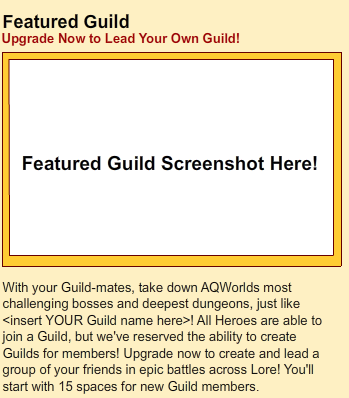 In order to have your Guild displayed on the homepage, we'll need your Guild Leader to create a thread on the forum. Once that's done, they should post a screenshot in this thread.

The pictures for the homepage will be chosen from this thread, so make sure you submit your most awesome screenshot (with as many Guild members as you can get together)!

You can either take a screenshot of:

The pictures should be no more than 350px wide and either in .jpg or .png format!

PS: The promised Design Notes about the improvements we've been working are still coming!