Join us for the finale of our Friday the 13th X Talk Like a Pirate Day event!

AHOY! The paranormal storm begun last week on Friday the 13th has only gotten fiercer. After exploring the wreckage of his sunken ship, you and Aurelio Voltaire discover his candy-loving companion, Hargoyle, has fallen prey to... The Curse of the Sea Witch! This weekend, log in and battle through a ghostly pirate ship to rescue Candy Claws and recover their lost treasure! 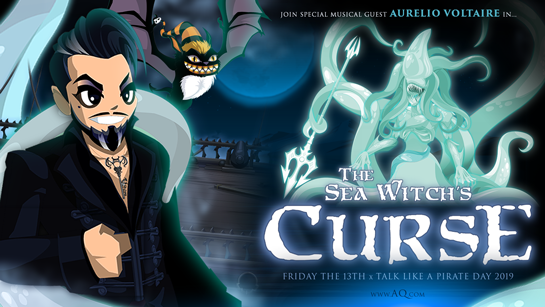 If you thought Friday the 13 superstitions were scary, prepare yourself, because what you're about to face will have your hook hands shaking and your peg legs knocking!

/join ghostship to continue your cursed holiday adventure and...

Aurelio Voltaire is the maker of music, films, books, comics, toys and... mayhem. He has appeared in almost ALL of the AQWorlds Friday the 13th events... and has become a fan-favorite for our players (not to mention beloved by goths, trekkies, and music-lovers in general). If you aren't familiar with his music or other works, you should check his site out here. This weekend, he returns to to rock out with your favorite sea chanties. This month's event also features She's Glowing, a track from his 2019 album, What Are the Oddz. 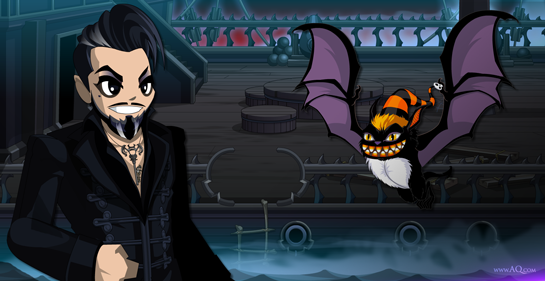 In addition to being an incredible artist, he's a downright amazing person to work with, and we're incredibly grateful for the time and energy he spent helping us with the release. (Especially since a few email gremlins sent most of his messages to our spam boxes! O_O) On behalf of the entire AQWorlds team, we want to thank Aurelio Voltaire for being a part of this special event!