Last month, we told all our heroes to log in 15 times during the month of December to get their free 300 Frostval AdventureCoins. Those ACs have been added to 31,000 heroes! (That is 9.3 MILLION AdventureCoins handed out. WOW!!!!) 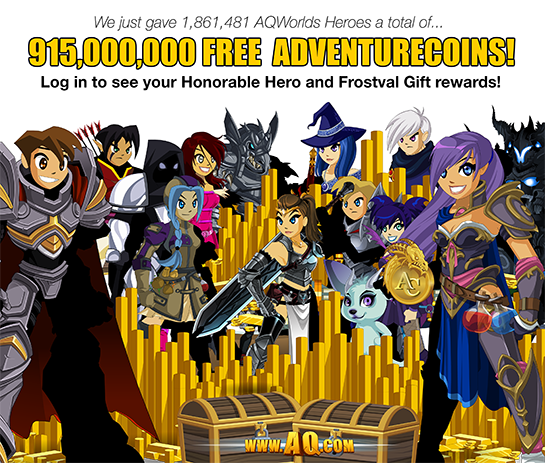 That's a total of 915,240,500 FREE AdventureCoins given out as Frostval gifts or to our Honorable Heroes. If you didn't get free ACs this time around, there's always this December!

All you need to do to get your gifts is log into AdventureQuest Worlds and enjoy!

*Please note, the Badge and ACs will not appear until you log in!
** This will be a new character page badge for 2015 Honorable Heroes.
*** To get the Honorable Hero ACs and badge, you need to meet the following requirements: