Every dravix, dravir, human, and dragon gathered on the plains outside Dragonhame. It was always a grand day when a young dragon was ready to take its first flight alone. Once the dragonling landed safely, the celebrations would begin and go on for days.

The first rite of passage would be over, and the dragonling would begin learning the magics unique to its element. The exhilaration and rush of joy a dragonling feels on its first solo flight is something they never forget. It is a day they will remember for the rest of their lives.

falling falling spin too much

oh no oh no do not feel good

Falling too fast where is momma?

As the crowd below watched, An'Desi climbed higher and higher, growing smaller against the vast expanse of sky. They townspeople laughed and cheered, congratulating An'Desi's teachers and kin... Until one young Dravir shouted, pointing skyward.

Silence fell as the crowd watched An'Desi begin to descend. It was too soon for him to return. As he fell faster, the dragons on the plain launched themselves into the air, straining to gain enough altitude to slow the fledgling's fall.

The crowd dispersed quickly, shocked into near-silence, save for the murmurs of fear and sadness. The healers crowded around, staring at the once-healthy dragonling. His scales were dull, and a rotten stench rose from his wings. 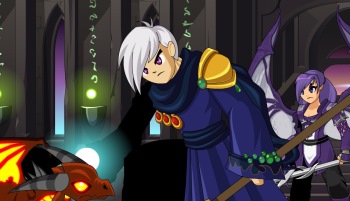 From celebration to quarantine

The healers gazed at each other in fear.

In a whisper, Ll'Lara, Dragonhame's Master Healer, announced the diagnosis: "... Plague has come to Dragonhame."