It's been a while since we did a livestream DN post...

Combat system changes, class balancing, and player live testing all starting soon as we fix the Yami no Ronin class's self DOT, fix a long-standing glitch, and add in a core gameplay improvement many of you have been asking for: making monsters respawn more quickly. 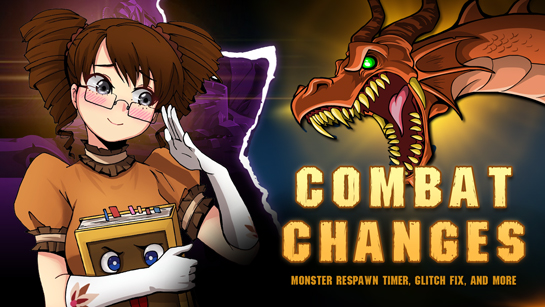 Last week, we rolled a fix to one of Yami no Ronin's class skills which -- when used in a glitched room -- would be super overpowered, and would cause monsters to respawn much, much faster. As you can imagine, that was both very broken balance-wise (not to mention unfair to players who didn't use the glitch), but made farming for items much smoother.

Yami no Ronin is a REALLY solid class, and we wanted everyone to enjoy it... but the damage skill was so broken, we could not leave it in-game as-is. After the initial skill change last week, we saw a lot of feedback, and when we went back to the drawing board to address it... Yorumi had an idea. He had been working on new fixes for several other map/room join issues. The fixes he'd recently finished would also work for the room glitch, too, with a few slight changes.

The ideal solution was to look at why players using glitched rooms were doing that, and weave those reasons into the fixes in a way that would benefit ALL our players and make the game more enjoyable on a global scale.

So...we dramatically reduced the time it takes for monsters to respawn.

Before: it would take 15 seconds or more for a monster to respawn after you killed it.
Now: you should see monsters respawning after 3-5 seconds.

That is a HUGE improvement, and is designed to benefit all players, regardless of which class you use... because playing the game will feel better at the core.

The class tester team has been hitting the servers crazy hard since last week, working with Pisces and Yorumi, to make sure we could get everything ready for a player test early this week, and that the new respawn timer felt good. They did, it does, and now we want to see what YOU think.

I sure did. The math that goes into designing and balancing class skills (the damage they do, the cooldown times, etc) has been balanced around the monster respawn timer that has been in-game since 2008. We needed to make sure that class gameplay would feel as good or better, and that the power levels would remain roughly consistent with where they were.

Scroll down to the bottom of the post to see a list of the classes/skills that have been changed. We'll be keeping an eye on your feedback to make sure we hit the target with these changes. If necessary, we'll adjust select skills over time.

Thank you again to everyone who's helped test today! We are restarting ALL servers to add Yorumi's latest fix to Artix, Gravelyn, and Sir Ver, and to add all the changes to the rest of the servers. The double XP boost will also be re-applied.

The class team will continue reviewing your feedback and we have a list of additional adjustments to make, and some other areas to look at. At the end of the week, we'll compile a list of everyone who's logged in to try out the new changes and give us feedback. You'll unlock a special 0 AC pet as our way of saying "thanks!" for being part of this incredibly big, significant change to make the game play more smoothly.

Thank you to everyone who reported finding an extra way to create a glitched room. Yorumi, Captain Rhubarb, and the testers are poking at it with a +5 Skewer of DOOM!

Brainstorming time: what would be a good 0 AC pet to give everyone who logs in this week, as a way of saying "thanks!" for helping us test the new monster respawn timer? Zorbak hitting a clock with a giant hammer? Open your idea floodgates and reply to this tweet.

It is great to see everyone so excited about the new changes! We've just added the monster respawn timer changes and class balancing updates to Artix and Gravelyn servers. Please log in and check them out.

PLUS our Cinco de Mayo daily gift drops have been added. Take on the Frogzard in Battleon for a chance to get the new seasonal gear. 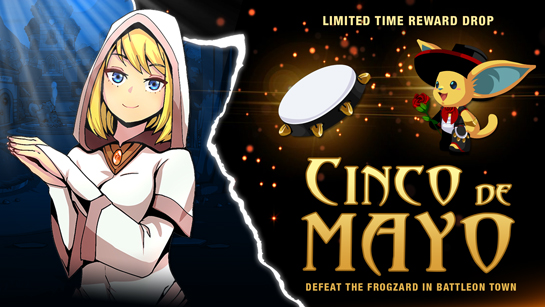 We're seeing a lot of positivity and excitement. Thank you to everyone who's tested and sent feedback so far. And to those of you highlighting different classes or monsters that need to be looked at... you rock! Testers are looking at everything now.

Based on the overwhelmingly positive current feedback, we will expand the testing to two non-member servers at 1 PM EST, to give more players a chance to try the change out.

9:55 AM: Early Member Feedback is solid

Thank you to all of our early-battling Members sharing their thoughts on the new monster respawn timer! The early feedback has been overwhelmingly positive... which means we hit the target pretty solidly. Let us know what you think by logging in and battling, too! Share your feedback on my Twitter account and the Class Team Twitter.

Yorumi had to run to take his daughter to daycare. He will be back soon and then... then the REAL fun will begin, as we do the final pre-countdown prep.

For the moment, Lycan Class's Savage Skill will have its Alpha Sense aura removed. This was only working in PVP, and we received a fair amount of negative feedback from PVP fans about it. Yorumi has an idea about how to make PVP-only auras work, so the class team is going to play around with this over the next week. If all goes well... in the future we may have more PVP or PvE-specific auras. (Is that something you'd like? Let us know!)

Yorumi is awake (mostly) and I have had two full cups of tea. So let's DO THIS! (ie -- make sure we're on the same page for today's timeline, then start divvying up tasks before we get ready to roll changes.)

4 AM: Slightly Ahead of Schedule Class Updates

Good morning middle of the night! The team has been pumping out the code, updates, and testing new releases, fixes, and more over the last few weeks. Last week, we announced the second skill for the Yami no Ronin class was being revised, and we expected to have a member-only test on Sir Ver early this week. GOOD NEWS! We are still on schedule for that.

Those fixes required some pretty deep changes to the game's combat system meant to improve gameplay on a global scale, so we wanted that extra testing before the player preview/feedback period. The time for that test will arrive... in the morning.

One of the backend improvements Yorumi has been working on is letting us do more / continue the regular server-wide gifts we began back in March. The most recent allows the game team to schedule automated server boosts... until something broke earlier tonight in the BEST WAY POSSIBLE (for you guys). That is why for about a half hour tonight, some players were getting 11,000 - 30,000+ XP per kill.

In resetting the XP boost to normal, we needed to restart the servers. That meant some of the additional class changes we have been working on rolled early, including: Yami on Ronin, Vampire Lord, ShadowScythe General, and others.

A full Design Notes post with details on the combat system changes (as well as all of the classes which will be/have been rebalanced because of them) will be posted later today.

These class changes are designed to play as good or better than they had before under the changes to the combat system.

Shadowscythe General was changed in a few ways. The long autoattack cooldown was reduced to prevent disconnects. Its damage caps a bit lower than before, but stacks twice as fast. Additionally, a bug was fixed where the class’s defense would not decrease properly.

Abyssal Angel’s kit happened to scale with the changes well, making it more powerful than every other farming class in the game. We rebalanced it to fit back where it was before.

Vampire Lord was overperforming for a similar reason to Abyssal Angel, and received a similar treatment.
Aspect of the Bat being loopable in combat now means that the class will feel more fun to use, and its adjustments place it in the same spot it occupied before respawn rates were lowered.

The fix is twofold here. Both to increase the class’s usability, and fix a overtly-high damage bug that was present because of it.

Legion Revenant and ALL the Dark Casters

What about (X class)? Will its skills change?

Possibly. We'll be keeping an eye on all of your feedback in this "new respawn timer" era. If a class needs to be rebalanced, the class team will take a look at it.

I bought a class and it doesn't play the same way now.

Noted! If you are seeing noticeable differences in how individual skills feel or play now, please send a bug report (if a skill is broken) to the Bug Tracker or send feedback to the Class Team's Twitter.

Will this change how often reward items drop from monsters?

This combat change won't affect item reward drop rates BUT we've been seeing a lot of feedback that item drop rates have trended too low. We began increasing the reward drop rates last week, and will continue to monitor your comments and feedback about this topic.