Chaos has Only Just Begun!

The Trolls won the war...

But it looks like each side still blames the other for what happened! The Trolls are SURE that a Horc Chaos Lord is responsible for this tragedy, and the Horcs - many of them - KNOW that the best defense is a pre-emptive offense. 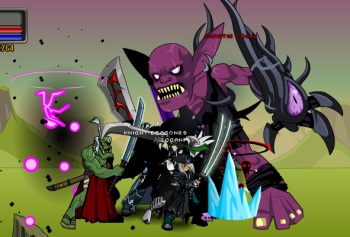 Are you ready for the War Boss?!*

After defeating the Chaorrupted Troll War Boss (this is NOT the Chaos Beast. We are not even close to the end of Bloodtusk Ravine! Muahaha!), you'll be taken to a screen where you can choose to view the Troll OR the Horc war end cutscene.

Trolls will see "Chaos Scars" while the Horcs can watch "Chaos Rage"! Both will give you an insight into the characters and what they are planning for the future of their enemies. Log in next weekend to see the VERY unexpected (in that no one's guessed it. Yet...) outcome of the Bloodtusk Ravine war!

SECRET: We said the winning side would influence the war boss, and it did! Had the Horcs won, the war boss would have been a Chaorrupted Horc. Zot's little sister. /sadface!

It's 3AM and it's time for all good - and exhausted - game developers to head to bed! See you on Monday, Heroes!

* Thanks to Tweaked, Zereldo, XXJukkaXX, dark warrior overlord, Omnilordzant, and Kroulo for an EPIC half hour of battling while we raised the war meter that last little bit!