Find out what happens after the events in The Reshaper's Saga

It's only natural that we'd release our earth day event last week, as a lead up to the 2018 Book of Monsters’ epilogue. If you haven't played through the Book of Monsters: The Reshaper story, now's the time, because this Friday, we'll explains what happened to Aria AFTER the Reshaper’s defeat... and just how Fae the ShapeShifter can help her become what she is TRULY meant to be. 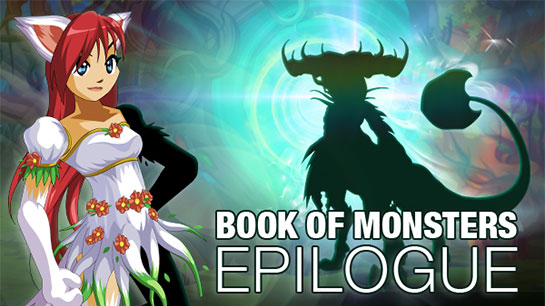 The AQWorlds team has released new story updates each week for almost ten years. "Story update" can mean many things, including our main story (which revolves around your adventures in Lore, and those of your favorite battle companions), holiday events, new towns, challenge battles, dungeon crawls, and more.

On Friday, April 27th, our story update will focus on the events that took place after those from Book of Monsters: The Reshaper Saga. (If you have just joined us recently, that was the 2nd of two Book of Monsters chapters in the larger main story for AdventureQuest Worlds.)

The Queen of Monsters and the story updates her creatures appear in take place after the 13 Lords of Chaos Saga. In the time after her ascension, we've battled her corrupted titans, two of her children, and more than a few of her lower level minions. Her focus has shifted quite a few times, in keeping with her nature. (As you might expect with a creature made of pure Chaos, the Queen likes to be... unpredictable... and keep YOU on your toes.)

All of our updates in the post-Drakath Lore are set in a world where the Queen reigns. And waits. And plots. And watches from above. But though she - and her chaos - are a larger, more global-sized threat, the individual people and towns of Lore still need your help to tackle dangers closer to home. Like dragons rampaging through villages, cabals of dark villains teaming up against you, and lycans and vampires baring their fangs and threatening war.

Coming Soon: Later this year, we'll be returning to Darkovia, to continue the story we began in last October's Blood Moon Saga. The team (and Artix) have a number of other stories we also want to tell this year, like the Great Fire War annd Sepulchure's Origin Story. Hang on to your helms, because even more dark, deadly, and lore-filled battles are heading your way.

AQWorlds Main Story: The Who's and What's

If you thought, "Wait... I thought the main story was about the purple dude with the giant wings?"... you were correct, but only partially. Our main story includes more than just the Chaos and chaos-loving creatures in our title screen. (Though we have a LOT of those!)

The Chaos Sagas include:

But our developers consider the main story of AQWorlds to be much larger - a comprehensive tale of your adventures in Lore. That is almost TEN YEARS of your epic victories, revelations about your past, your adventures on land, air, and sea. A tale that grand, and massive, covers a lot of ground, and includes the stories of many of your favorite characters, as well:

We often get asked who writes the main story. Over the years, that's been a number of people. Artix, Cysero, me, occasionally a number of guest writers from our contributor team, and now Memet. But throughout all of those writer changes, one creative entity has remained the same... YOU.

The direction of our story releases depends on a number of factors; one of the most important is community feedback. Though we always have a general idea of where we want a given story to go, and plan out all the bones of it in advance, if you guys aren't enjoying the way a particular story is moving, the weekly releases give us the freedom to change its direction.

A player on Twitter, emits, asked: So why do you start new stories when you have others from years ago, or place "random filler" stories?

That is a very fair question! Because we DO update on a weekly basis (which includes new maps, monsters, characters, rewards, and cutscene animations), we occasionally need more development time to prepare the next round of story updates. Because we don't want to leave you guys with nothing new to do for a week, we add in things like challenge battles (and their rewards) or other one-week events, which generally expand the lore about someone or something.