Get the Darkest Gear of the Year... and the NEW Class!

Log in now to find the Black Friday Rares Shop in the game news, plus the Black Friday house items shop in your game menu! Then celebrate the Harvest Fest by saving your friends and family in our Feast of Fear event! We've got a bankload of items here for you... IF you've recovered from your food coma... so check these beautifully black blades, armors, and accessories out! On Monday, log back in at 12:01 AM to find the Cyber Monday rares and house shops! 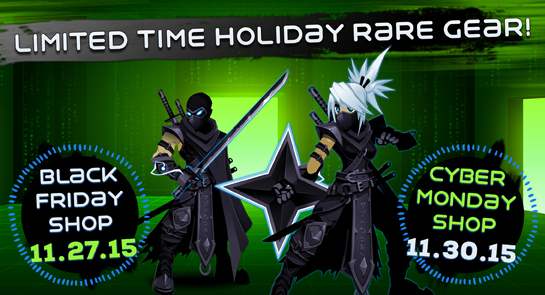 The Blademaster Assassin is designed to be a very evasive type Class that excels in taking multiple targets at once. The Class is an excellent farming and PvP Class, and has massive AoE. You can find a breakdown of the class's skills here, courtesy of AQW Class Designer, Sync!

New and Returning Gear for 2015 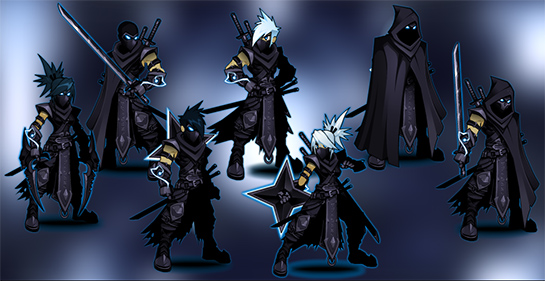 WOW you guys LOVE this class! Due to the power and massive skill animations, we originally intended this class to be available for AdventureCoins. Since the class released, SO many of you Undead Legion members have written in, tweeted, and emailed asking for a Legion Token version that today Dage and I sat down and came up with a plan.

For his birthday in March of 2016, we are going to release a version of the Blademaster Assassin Class for Legion Tokens. The animations and skill values will be slightly different, but the class will still be a powerful heavy hitter. Dage will also change the art so that Legion Member will have a visibly different and exclusive version to call their own!

If you bought the AdventureCoin version in the Black Friday shop, your art, skills, and animation will not change - and it will remain different and distinct from the Legion Token version.