Heroes of the Bacon Cat Force… UNITE! The Laser Shark Brigade’s invasion of the flying Bacon Cat Fortress is about to begin, and Ziri needs every adventurer’s help to drive them out. 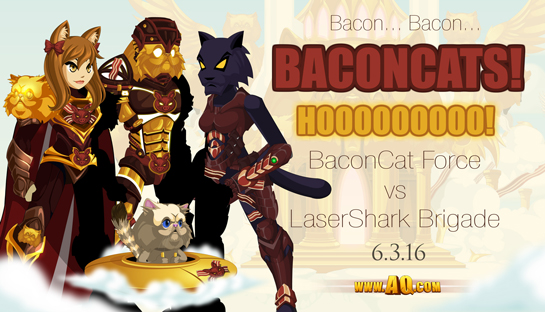 It is vital that we get as MANY heroes possible to attack the waves of invading LaserSharks. That's why ALL heroes will get to:

SECRET: If you are not an AdventureQuest worlds, do not read any further!

Well, hello! As an AdventureQuest Worlds member, you are eligible to join the Special BaconCat Forces Unit (SBCFU), an elite group of heroes with the skill and ability necessary to take on the heart (and the boss) of the LaserShark Brigade!

You'll have access to exclusive quests and the BaconCat Lair Underground (which... doesn't make sense now that I think of it, since the Force HQ is in the sky, but... hey. It is Ziri the Daimon's world and delusions, so we go with it!), plus member-only gear!

* Though the Great White Cyborg LaserShark may not recognize them once they've triggered the security magic!