Find Aranx’s Celestial Birthday gear in the September Featured Gear shop in your game menu! These are some of the best Good-themed items we’ll release this year, but they won't be available for long 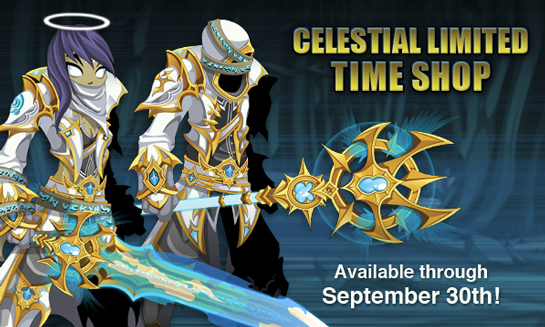 The above items will go permanently rare on September 30th. The following items will be available until September 30th, then will not return until 2017, during the next Celestial Realm zone update.

Both the Enchanted LightCaster and the Evolved LightCaster armors will automatically unlock the LightCaster Class (currently scheduled for release sometime in 2017). These armors cannot be sold until October 1st.

Yes, I did! Aranx, whose zone the class would be based on, and I discussed this a great deal. He and the class designers DO want to make a LightCaster class, but not until after the server rewrite. Once that is done, we'll be able to introduce new, VERY cool abilities -- and that's something a class like this SHOULD have.