This weekend, forge your own path!

An update that you all have long awaited is here- the Blacksmithing trade skill update! Now, heroes can visit Cysero’s forge in /battleontown to unlock all new enhancements and enhancement traits. 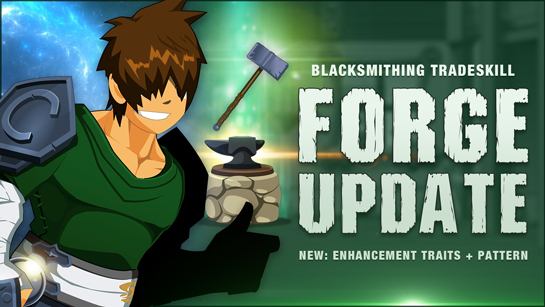 Back in April, you all donated a collective 1 TRILLION gold to let us know that you wanted a new and improved Blacksmithing rep. So, in response, we overhauled the rep faction, and gave it a number of rewards that everyone is sure to enjoy.

Once in the forge room, you can click the anvil to access a series of quests and shops to unlock these brand new enhancements. Here, you can:

Along with the new Enhancement Traits is a brand new enhancement pattern- Forge! Similar to Wizard, Fighter, Thief, and so on, an enhancement pattern is what determines the stats your gear will provide. Forge is an extremely offensively-focused enhancement, providing primarily Luck, Strength, and Intellect.

How Do I Get Started?

Heroes can begin by finding a series of Blacksmithing Rep quests, where you’ll turn in materials or gold to increase your reputation. You’ll find that this rep takes longer than most- but the rewards are worth it!

Upon reaching certain ranks of Blacksmithing (and certain levels), you’ll be able to take on Forge Quests. These are long adventures to collect materials and story progress to unlock your new enhancements and enhancement traits.

Weapon enhancement traits offer you a marked increase in power but are difficult to unlock. These are intended to be an alternative to Awe enhancement traits (with some being more powerful) that offer you more coverage and options in combat, and can be extremely powerful in the right situations.

Cape enhancement traits are for higher level players that wish to get the most out of their classes, and are willing to sacrifice some stats for another. These give you a positive benefit, but at the cost of losing stats somewhere else.

To learn more about the effects and numbers of enhancement traits, check out this guide!

In the future, we’d like to create more (and potentially helm and class enhancement traits), but we’d like to hear your thoughts first! Let us know what you think at @AQWorldsGame on Twitter, or on the Official Artix Games Discord!