Thank you to everyone who sent messages with wishes of safety and to check in on our Florida team members. I am writing to give you a status update. Our hearts go out to everybody affected by Hurricane Ian, both in Cuba, Florida, and any other areas in its future path. While the storm is over for us, here, it is still heading north, and its impact is not over yet. We are making a donation to local relief efforts* to help recover from the storm. 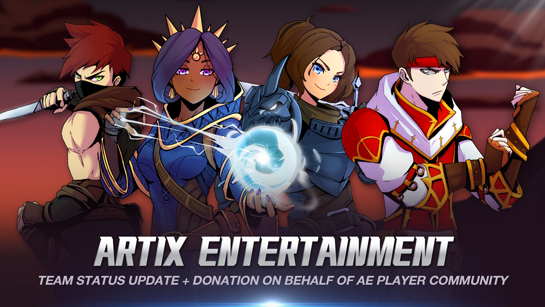 Everyone on the team is alright. The storm turned and hit considerably south of us, the left side -- which is the far less dangerous side. We are checking in on individual team members (and their relatives, our AE extended family). So far, everyone we have heard from has had to deal with power outages and mild to moderate clean-up, at most. Currently we have about 50% of our Florida staff without power.

If you didn't know, almost all of the AQ3D team lives in the Tampa Bay area. Several of our AQ3D team members evacuated to make sure they and their families stayed safe. Because of this, the AQ3D game update was delayed, and we added an XP boost instead.

An overwhelming majority of other team members (AQWorlds, AQ, DF, ED) live outside of Florida. Those game releases will proceed as planned.

Thank you again to everyone who reached out. It means a great deal that you care. We will continue to keep you posted with any new developments about the team status and AQ3D release as we move forward.

And if you, your friends, or your family are in a position to help, we encourage you to do what you can. You can donate to relief efforts through:

* Artix is donating to Save the Children, which has been "supporting children’s most critical needs in emergencies along the Gulf Coast since 2005," including Hurricanes Irma, Michael, and now Ian.