Support AQWorlds and Become a Legend!

AdventureQuest Worlds went live in 2008. 14 years ago.* Many insanely-passionate players jumped at the chance to become the first Members of AQW. These dedicated, early supporters of the game became the game's Founders. And in honor of their trust and confidence, every October, we hold the Upholder promotion. Anyone upgrading during that month automatically becomes an Upholder... instantly making you one of our most Legendary supporters and unlocking a host of exclusive items and perks! 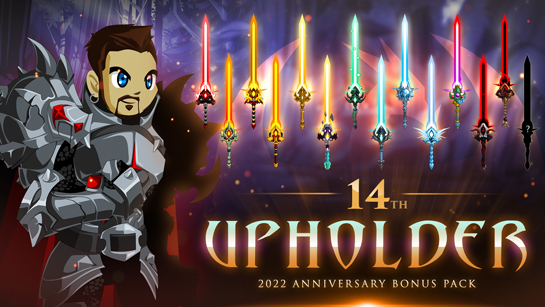 AdventureQuest Worlds would not be what it is today without the support of those original Founders and all of the Upholders that came after... and we would not be able to build what comes next without your support now.

How to become a 14th Upholder

Starting this Friday, September 30th, at 12:01 AM EST, we are once again offering the chance to become an AQW Upholder.

Our 14th Upholder promotion begins now!  Badges have been added to all heroes who are already 14th Upholders. The 2022 exclusive Star Swords will arrive with Friday night's game update.

What does a 14th Upholder get?

As a 14th Upholder, you'll receive:

The 14th Upholder Star Swords are all themed on bosses from across our game universe. (Plus the bonus, rare Platinum DragonLord StarSword inspired by DragonFable.)

Earlier this year, I polled my followers on Twitter to see which of the bosses across our game universe were the most popular. Then, along with some of the AQW game artists, we selected the following to base Star Swords on. Thank you for your suggestions and feedback!

DragonRoad Star Swords For ALL Upholders

We wouldn't be here without your support, and we want to make sure you know it! That's why, for the last two years, we've added new Star Swords available to every Upholder... and that continues this year. You'll find them in the Star Sword Merge shop in /dragonroad. 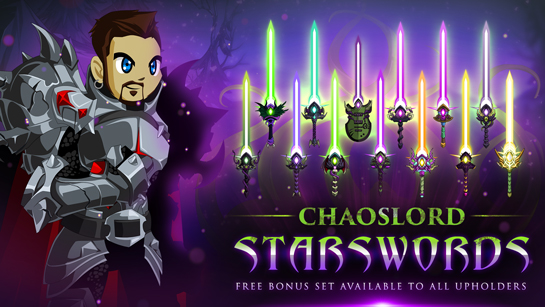 The star swords coming this year in the Dragon Road merge shop will arrive next week.

Want to know if you're already an Upholder?

Your support makes all of our daily and weekly releases possible. It allows us to keep updating and expanding AQWorlds, and lets us keep most of the game free to play for ALL heroes.

Thank you for helping us keep AQWorlds online and updating since 2008, and working on the early development phases that will bring AQWorlds Mobile to life.

* We had no idea what kind of chaos we would create over the coming years!
** Please note that only Upgraded Legend Memberships count towards 14th Upholder.
*** The Sentinel Class will be available for ALL previous Upholders and Founders as our way of saying thanks for supporting us in the past!
**** Suggested by AQWorlds Hero @TheSkyAE on Twitter.