Video Game Studio goes ALL IN on Nicolas Cage

A Whole New Era of The Craziest, Meme-iest Adventures is HERE

Recently, we watched a documentary about how Nicolas Cage was almost Superman. It broke our hearts, seeing that movie not happen. We intend to rectify that wrong and center our games around our National Treasure, Nicolas Cage. 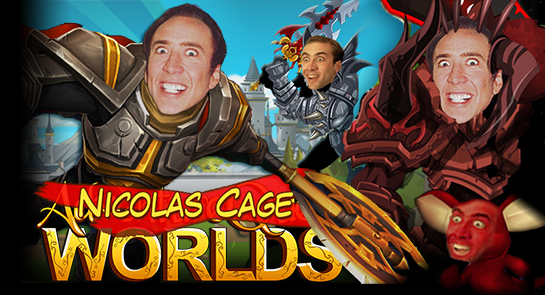 Battleon shall be renamed to City of Angels, and you shall be able to fly, which will be accessible through our new travel system, Con Air. Unless you’re undead, in which case, you’ll just be a Ghost Rider… Just don’t Drive Angry.

We realize this may be Inconceivable to those of you looking through the Looking Glass, but you have to put The Trust in us and be sure that no feature will be Left Behind. This is going to be The Best of Times.

Expect new Nicolas Cage classes, like Lord of War, The Wicker Man, MatchStick Men, WindTalkers, and The Sorcerer’s Apprentice, which will be released in the Season of the Witch.

For you Undead fans, we’re going to be Bringing out the Dead, because the Vampire’s Kiss will now allow you to get married, and you can have your Honeymoon in Vegas. (Just be careful it’s not The Kiss of Death.)

Just like Peggy Sue Got Married after being Moonstruck while Leaving Las Vegas. You will be able to Face/Off again Amos & Andrew using Captain Corelli’s Mandolin, but you have to do it before it’s Gone in Sixty Seconds.

Next, if you have Time to Kill, you can jump Between Worlds like an Army of One to a land with Fire Birds or to The Frozen Ground.

If you’re Seeking Justice, you can unleash your Rage and Rank Up and become a Bad Lieutenant, like GI Joe‘s Snake Eyes.

Be sure to tell Your Mom and Dad about this game update, because if they want to get you our new upgrade so you can be a part of The Cotton Club, you can just Pay the Ghost.

We realize this Change may make us an Outcast, like a Valley Girl of the videogame industry, but we are Wild at Heart and our love of Nicolas Cage will last until The Dying of The Light.

Also prepare for Special Musical Guest: Industrial Symphony No. 1: The Dream of the Brokenhearted. (Because God knows, we didn’t know how else to fit that in here!)