Apple iPhone/iPad players-- Please join me in an angry, frustrated roar of NOOO to let out all your frustration. When you are done, take a deep breath and be reassured by some GOOD NEWS: This bug will WILL BE FIXED in the next update. 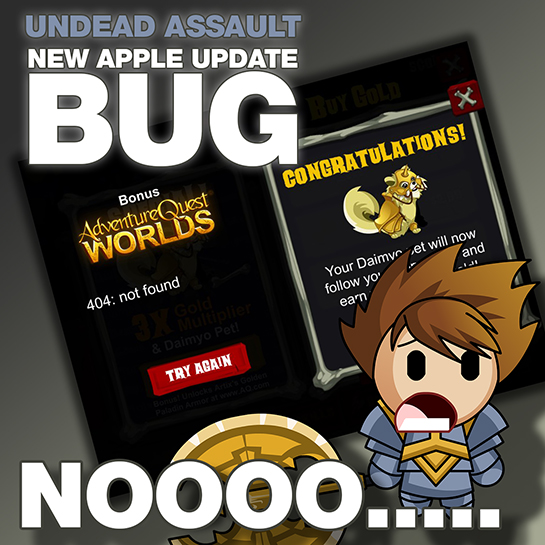 The new Undead Assault update finally went live, but its' primary new feature, the one that lets you link to AQWorlds, unexpectedly broke upon release. I (Artix) feel just like you do... because I use an iPhone, bought on day 1, and have been eagerly waiting to redeem my armor in AQWorlds too. The feature was functioning correctly in testing-- so it was a complete shock when the new update went live and the new screens were not showing like they were supposed to.. The next Undead Assault Apple update will fix this. You do not have to do anything but join me in demonstrating the steel patience of a true undead hunter.

Thank you for your patience, understanding, and support. I look forward to liking your extremely lengthy "NOOOOOOOOs!" in the comment section below. - Artix