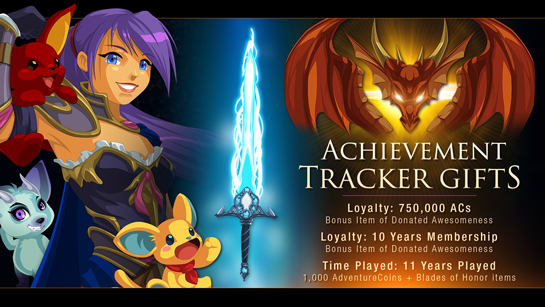 After 10 years of increasingly epic items (from pets to armor sets to map-sized houses and last year's exclusive class variant), when it came time to plan this year's Achievement Tracker rewards, we wanted to do something new. Something bigger. Something that we knew you guys would want. Something that would let you choose your own reward.

This year, for the 11 years played achievement, for the first time ever, we decided to give the gift of AdventureCoins for an Achievement Tracker reward... 1,000 AdventureCoins! Spend them on anything you've been saving up for - a rare armor, more bag slots, or keep them until the upcoming holiday shops arrive! You'll also find the Blades of Honor cape and blades in your Book of Lore badge shop.

The 1,000 ACs prize will be awarded the next time you log in, starting tomorrow.

The 10 years membership and 750,000 ACs achievement, each come with a Koofu Rider pet in their Book of Lore badge shops. Click the pet to accept its quest. You'll be rewarded with a Golden Item of Donated Awesomeness. Follow the instructions on the item to claim your prize!

NostalgiaQuest is available to all players with the 8 years played achievement badge, and each year will get several new, very nostalgic items added to the zone. This year's weapons are:

Talk to Yulgar in NostalgiaQuest to have your weapon forged into a dual-wield variant. If you want to return it to a single-wield version later, you can always change it back.