Our verification classes -- Guardian, DragonLord, Star Captain, and Defender -- are unlocked by AQWorlds heroes who have also upgraded in one of our 2D, single-player games. They've been asking for years for their exclusive classes to get updates... and now the time has come! 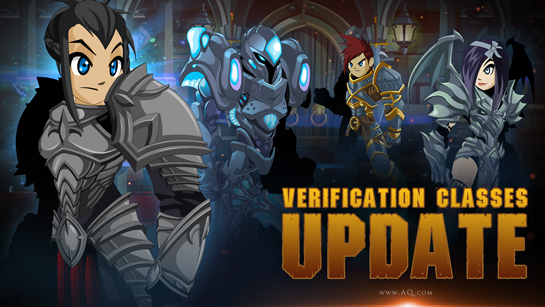 Each week in November, we'll release another verification class update. Last week, we updated the AdventureQuest Guardian Class! Get all the details on that class here. THIS week, we've got... the DragonLord Class update! Read on for update details: what is changing, how to get your own, and the new balance details. 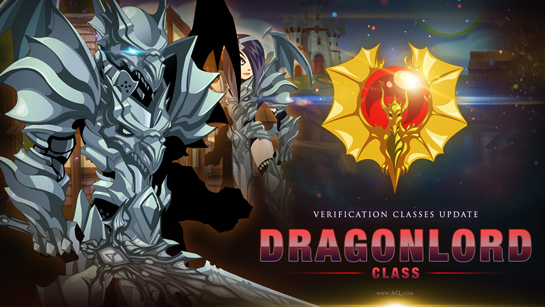 Lost to time and found again, the DragonLord class has evolved! Inspired by DragonFable, this new version of the class offers many powerful new tools to battle multiple monsters at once by imbuing yourself with the powers of ancient dragons.

The new AdventureQuest Worlds version of DragonLord draws heavily from DF’s DragonLord, and also DragonWarrior, DragonRogue, DragonMage, and the titan DragonRider. Take on one or more elemental aspects, and then tap into their full power with your Primalization ability! This class is designed to fight multiple monsters at once, while harnessing the full potential of the elements provides you the power to take on much more powerful creatures.

If you are a DragonLord in DragonFable:

If you are NOT a DragonLord in DragonFable:

Before there was AQWorlds, there was... DragonFable

DragonFable is the story of you and your dragon defending the balance of the world against powerful enemies and creatures beyond imagination! With a constantly-updating weekly cycle of main story, side story, endgame challenge, and zone revamps, DF has lots to offer for all types of players. With intricate classes, many storylines, and a world to explore, epic adventures await you at dragonfable.com!

Recommended enhancements: Fighter, Lucky. Armed with the might, wisdom, and cunning of ancient dragons, the DragonLord charges into battle with their bonded dragon at their side. Those worthy of greater power can evolve and unleash their elemental draconic magic to devastate the battlefield.

To start off, that’s right, this class uses this specific mana regen model. However, this is completely intentional because your three-target autoattack and healing skill will provide more than enough MP in multi fights.

Dragonlords channel the might of dragons into their attacks, heavily striking 3 targets within range at once. Combines basic Draconic Alignments with the Earth element to confer additional effects:

DragonLords have a slightly slower autoattack, but it can hit 3 targets at once. If you have an active elemental alignment from one of your next 3 skills, you can either inflict a DoT, gain an HoT, or increase your hit chance. Coordinate your Draconic Alignments, and gain the benefits of all 3 types at once!

Draw upon the destructive power of dragons to blast 3 targets with a powerful attack. With no Alignment, applies Draconic Fire, increasing your outgoing Physical and Magical damage by 10% for 8 seconds. If Draconic Water is active, it is consumed to apply Draconic Balance, reducing your target’s Haste and Dodge by 15% for 4 seconds.
Increase your offensive capabilities by drawing upon fire dragon magic. This class’s special mechanic is to draw upon the powers of elemental dragons and combine them to create Alignment combinations. You’ll get the hang of it once you use two skills in a row. Using Legacy Ablaze while Draconic Water is active gives your foes a debuff!

Resonate with the skill of dragons to regain control of the battlefield and attack 3 targets. With no Alignment, applies Draconic Wind, increasing your Haste and Dodge by 20% for 8 seconds. If Draconic Fire is active, it is consumed to apply Draconic Lightning, increasing your target’s Physical and Magical damage taken by 20% for 4 seconds.
Bolster your haste and evasion by enacting upon wind dragon magic. Combining Wind with Fire leaves your foes even more vulnerable than before. Casting Draconic Resonation while Draconic Fire is active grants a significant offensive boost.

Channel the power of the Dragonheart Shards to fulfill your dragonic destiny. Inflict damage based on missing MP and apply Elemental Dissonance to 3 targets, reducing damage, Crit Chance, Crit Multiplier, Hit Chance, Dodge, and Defense by 15% for 10s. Applies additional effects based on your Draconic Alignments:

Your ultimate attack, this skill has four features. First, this skill weakens your targets all-around, reducing damage, critical hit damage, hit chance, dodge chance, and defense by 15% and setting you up for even more combos.

However, that’s not all that this skill does. Just like Cursed Blade, this skill deals more damage the less MP you have. This means that spending the 60 MP needed to cast Primal Alignment lets you land a heavy blow. Third, this skill grants supercharged versions of effects you’ve already seen:

While your first three Ultimate Draconic effects are evolved forms of what you would get from your Aligned auto attacks, Advanced Alignments grant powerful new 2-second debuffs:

These three-skill combination effects are built to take down titans. Freeze your foes with a punishing haste debuff, rupture their defenses with a devastating DoT weakness, or neutralize their critical hit chance, and further punish attacks that are guaranteed criticals!

The fourth feature? A powerful extra ability, available only to Rank 10 DragonLords!

Increases Haste and Hit Chance by 15%.

Tap into more of your draconic powers as you rank up. Although this class is built to land long strings of critical hits, the impact of each critical hit is reduced to compensate.

At Rank 10, Primal Incarnation immediately grants you +20% to outgoing damage and Crit Chance, as well as +50% to Crit Multiplier. However, if you wait for Elemental Unity to expire, you will have a very small window where you instead gain +60% outgoing damage, and a whopping +200% to Crit Chance and Crit Multiplier. Break the balance, and only output a mere fragment of your true potential. If you have the prowess to coordinate your elemental alignments and remaining mana, casting Primal Alignment within the correct window allows you to unleash the true might of dragons!

DragonLord is a triple-hitting, element-mixing, damage-slinging beast of a class, designed for big combos and taking on multiple opponents at once.

Although this class uses a more restrictive mana regen model, you will have next to no trouble when fighting multiple targets. While it shines for multi-monster mashes, DragonLord has tools to make it a viable group fight option, for both low-difficulty and high-difficulty challenge bosses.

As a bonus, often-requested feature, this class has battle pet compatibility! Summon a baby dragon with Destiny Defended, or bring your own battle pet (BYOBP) for a skeleton, a floating sword, or even a pot of gold! Just like Grim Necromancer, your damage will not be reduced even if a battle pet is not active.

In conclusion, DragonLord is a class with a lot of combos that reward cycling through multiple elemental Alignments, time your skills right and be rewarded with powerful combination effects!