Read on to see what we've updated, what's been fixed, and stay up to date! 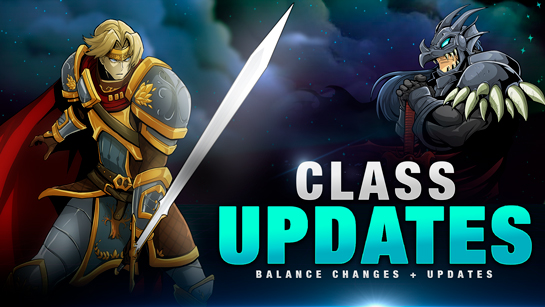 Significant reworks to better align the class’s damage types, desired stats, and give it a playstyle. Cooldowns were significantly reduced overall, making the class play much faster. Original niches have not significantly changed, but the class now functions as a strong mid-game high dodge solo class that can scale into early endgame.

This class presented an interesting challenge in design- it was already strong (if underappreciated), and aligning its damage types and stat model would have made it far too powerful. A light redesign gave it a new way to play while still being usable the same way it was before, allowing it to now function with 100%+ dodge, and encouraging more interaction from the player.

Significant cooldown reductions and some damage increases to make the class play faster, smoother, and be more powerful. As well, a small taunt was added to the last skill, giving it some more niche utility. Starts as a tanky mid-game solo class, but scales into late-game.

Updated to play smoother, be more fun, interactive, and engaging, and more powerful when obtained.

This is a class that didn’t need that much of a buff to become balanced. We feel that classes like this often get overlooked because they haven’t been updated in a long time, but the case sometimes is that they are strong enough to not need changes urgently. Because of that, we primarily cleaned up its mechanics and gave it a few playstyle spins, and a few fun mechanics.

As we slowly reach the end of F2P classes to receive changes, more cases like this will occur.

Chaorrupter Unlocked is a powerful option against Chaos monsters, but it could be easily obtained at a low level. These changes aim to increase the difficulty it takes to obtain the weapons while preserving their damage boosts. Additionally, both weapons will become 0 AC in the near future!

Burning Blade of Abezeth was causing some confusion as it could be obtained by players that were unable to equip it. To prevent any further confusion, the weapon has been moved to a shop and made more consistent to obtain.

Nechronomancer’s farming performance fell behind other classes after the introduction of Forge Enhancements. These changes aim to make the class less frustrating to use while also bringing its farming capability back up to a more competitive level. Additionally, the class has received a set of changes that drastically improve its performance against single targets.