The 2020 Calendar is here, and will remain forever epic!

It’s that TIME of year again... a new Calendar Class is here! When you get the 2020 Calendar from HeroMart, you'll unlock in-game rewards inside AQ3D, AdventureQuest, DragonFable, EpicDuel, and the Underworld Chronomancer Class / Armor set in AQWorlds. 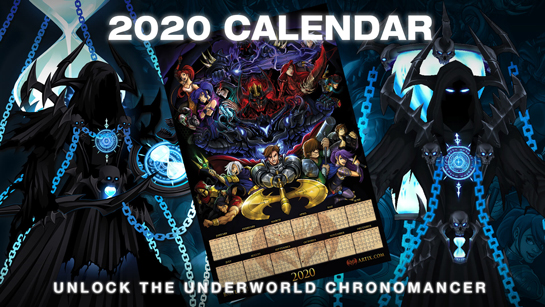 We call the core base of skills the Timeless Chronomancer Class. With the addition of the year-exclusive items, we can make an almost-endless array of variants, each with its own feel: the Corrupted Chronomancer, the Underworld Chronomancer, and many more to come!

The Timepieces that come with the 2020 UnderWorld Chronomancer Class can be used in conjunction with the returning Hourglass consumable items to alter the way the class plays.

The new calendar classes are built around 6 unique class-only consumable items. These act as a (pseudo) sixth skill you can use to customize the class to your own style and needs. There are...

These provide a base to your class. They either buff you in specific ways or provide complicated interactions to your skills. (These or other class items like them will return each year.)

These alter your skills with different gameplay elements.

Top off your stacks of Hourglasses and Timepieces by grabbing the pet in your Book of Lore 2020 Calendar badge shop.

Note: You can only have one Hourglass and one Timepiece active at a time. (Changing to a new one will end the affect from the previous Hourglass or Timepiece.)

Underworld Chronomancers rely on Hourglasses and Timepieces they create using their Hourglass Pet (equipable items found in the Book of Lore) to manipulate and distort time itself.

Mana Regen: Gain mana from all hits landed in combat, and especially on critical hits.  The amount depends on damage relative to *your own* HP total.

Reverses time to heal you and up to 4 allies. Heal on you is increased by stacks of Temporal Rift and consumes those stacks.

Deals damage to your target based on the damage you've recently dealt while under the effects of Temporal Rift (in the past 10 seconds).  Consumes Temporal Rift stacks.

Rank 10 Passive: Hands of FateStarting from Rank 1, you can equip Hourglasses and Timepieces as a consumable to enhance your other skills.

Note: This one is as straightforward as you can get. It’s a broad buff on everything you want. It doesn’t complicate things or add strategy. You just smash it and go.

Hourglass of Paradise
[Timeless Chronomancer Class]
For the next 2hrs, your Corruption Through Time skill now also toggles between several new buffs. You get a mana and heal over time, a reduction in damage taken by 40% and increased haste by 30%. Also, your crit chance and damage are reduced by 40%. These auras last 2hrs and toggle on and off each time you use Hourglass Inversion.

Note: Mix this with an offensive Timepiece to mitigate some of the Timepiece’s defensive weakness. Turn Paradise off right before your nuke for great sustain AND damage!

Hourglass of Transience
[Timeless Chronomancer Class]
For the next 2hrs, Corruption Through Time makes you Transient for 10s. Applies a growing DoT to you. Using it again applies Ephemeral for 5s. Buffs dodge & damage by 50%. Using Hourglass Inversion while Transient gives you Incorporeal for 10s. Increases END & Haste by 50% & removes Transient & Ephemeral. While Transient, Sand Rift applies Flow. Increases enemy damage taken by 8% for 5s, stacks to 3. While Stable, it instead applies Ebb for 8s. Gives a growing DoT

Note: This Hourglass lives up to its namesake- your life is quite temporary and chaotic. But, balance your resources, and you'll find it paying off handsomely.

Get Ephemeral and you'll be dishing out huge damage while being nearly invincible- but your stay will be quite temporary.

Stabilize yourself out and you'll act faster and gain health- but you'll lose your Temporal Rift stacks.

Try to strike a balance alternating between these two skills, and you'll be able to extract the item's full power- but don't get too greedy!

Note: A simple Timepiece that rewards you for consecutively hitting your opponent to ramp up your damage. As soon as you have Eternal, your chances of seeing those big orange numbers appear on Temporal Collapse are almost guaranteed. On top of that, Distortion Through Time now grants increased hit chance, allowing this to be more successful.

Timepiece of Inevitability
[Underworld Chronomancer Class]
For the next 10 seconds, Distortion Through Time also applies Inevitable Corruption, increasing your outgoing damage and Haste by 12% for 20 seconds. Using the Timepiece of Inevitability while Inevitable Corruption is active applies Snap to your opponent, dealing significant damage to them after a short delay. Cooldown: 20 seconds

Note: Another straightforward option, this Timepiece focuses on seamlessly adding extra damage so long as you can keep it refreshed often. In between your decimation-inducing finger-snaps, you get to enjoy a notable buff to both your outgoing damage and your haste, boosting the rest of your skills. This all culminates in an inevitable nuke from Temporal Collapse.

Timepiece of Pestilence
[Underworld Chronomancer Class]
For the next 10 seconds, Distortion Through Time also applies Infectious Air, increasing the amount of damage the enemy takes by 20% for 10 seconds, stacking to 3 but is consumed by Temporal Collapse. As you recover from the contaminating air, your incoming damage is increased by 100% for 10 seconds. Also applies a light DoT and Decay to your target for 10 seconds, preventing them from healing. Cooldown: 10 seconds

Note: Lastly a Timepiece that makes you and others gain damage exponentially through lowering your enemy’s defenses until you tear them down with your utter prowess. This Timepiece requires a bit of timing alone however benefits greatly when given haste buffs allowing you to stack your Infectious Air aura with ease. Make your enemy rot and make the world of Lore witness the true power of The Undead Legion!