Even the Chaos Lords know the most dreaded monster in our world is Lag. Oddly,  few people know there are two types of lag monsters. 1st is Lag from Flash trying to draw our artists' awesomely detailed armors and weapons at 24 frames per second. AQWorlds art has really evolved! The solution for this graphics lag is to hire worse artists. (Someone please make a note of this.) The 2nd type of Lag is server lag. That is… when you click a button to do anything from battle a monster to open a shop, our servers and database do crazy things to make sure everyone else sees what you are doing. This is the most complicated part of the game and the part most prone to problems. Have you ever experienced lag spikes, “midnight lag,” or got booted from the server for no reason? It is ALL because of Lag #2 (Server Lag). 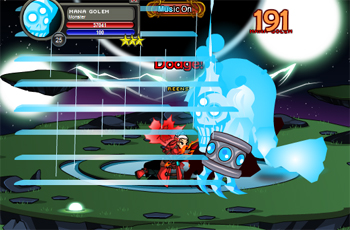 This Lag is Elemental!

Zhoom spent the last two weeks rewriting huge chunks of the server and database. As of yesterday combat should be smoother, those lag spikes should be pretty much gone, and midnight lag - once and for all - should be completely gone! Meanwhile, Yorumi and Reens have been working on the graphics lag by going through every cell of every map looking for laggy things and fixing them. Currently, the worst offender is the Mana Golem in /join elemental which drops us down to 4 frames per second when we battle him in a group. You can try this for yourself. Oh, and do not worry, the suggestion of letting me redraw him as a stick figure was vetoed. These server improvements are being made in preparation of the new classes which will be coming in October and the new features we are going to begin working on. *coughs* Guilds *coughs* We are also going to be adding TWO new servers in anticipation of the upcoming AQWorlds Birthday Event. Battle on!

P.S. Because of a promise I had made, Quibble will be in BattleOn until Monday, not Friday.