This is just a quick post telling you some of what's going on right now and some of what to expect.

The Artix and Sepulchure Action Figures are on sale at U.S. Toys R Us locations all over the United States and also on HeroMart.com 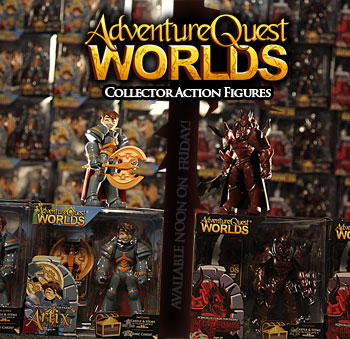 People have been mailing us, tweeting us and letting the community know through the AQW forums as soon as they get their own collector's Artix or Sepulchure figures and sometimes they get BOTH! We've even gotten a few YouTube videos of people receiving their boxes from stores or in the mail and letting us watch them open them up!

It's a little early to say but things are looking good for a SECOND SET of collector's figures but that's a LONG way off. Let's not get ahead of ourselves.

We also have a brand new poster for sale at HeroMart.com which is the Good Heroes of Lore poster, drawn, inked and colored by our own Diozz (who you may remember from his Live Draw event!) 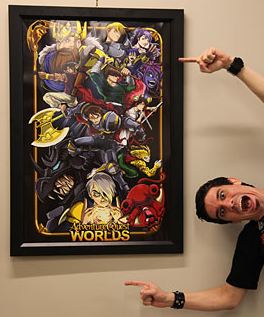 Diozz is pretty excited about his first poster!

There are no pictures of this yet on the site but the poster also comes with the Soul of a Hero armor set, including the Great Spirit of Heroism and Valkyrie of Heroism animated cloaks, also drawn by Diozz! 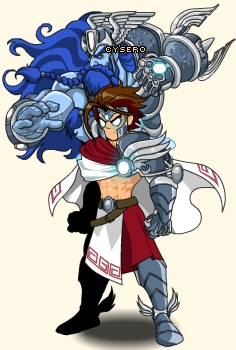 The team only signed 50 of there and half of those are already gone but there are a few hundred of the unsigned ones if you don't want your pretty poster all cruddded up by a bunch of game developer signatures.

We've also got an Art Contest going on right now!

The Themes Are:
1) Artix vs. Sepulchure
2) Zombies
3) Any Combo of the above options

The Contest Info page can be found here! Please read the rules carefully and PLEASE don't waste our time with stuff you rip off from the internet. You'll get caught and we'll spend a lot of time here at the lab making fun of how stupid you are. Don't be that guy.

Now let's hop into my time traveling phonebooth and dial the number for the near future.

This weekend, AQW Zombies continues as the world of lore falls further and further into the clutches of Sepulchure and more and more of your friends succumb to the zombification effects of the vile green mist.

In this alternate timeline, the traveling sales moglin Quibble Coinbiter is still traveling from town to town selling his never-before-seen, slightly-used rares and items and this Friday he returns to Battleon with a load of Zombie and Zombie Slaying themed AC RARES and ITEMS!

We'll also be trying a couple of new things in Quibble this time...

1) INVESTMENT TRINKETS: This is a new idea that I think most of you will like. Quibble will be selling small AC trinkets for about 1000 ACs each/ What do they do? NOTHING! They just sit in your bag and take up space.

BUT... a few days after Quibble has left Battleon, these investments will appreciate in value! You will be able to sell them back for MORE than you bought them for!

There will be two versions of this trinket. A Member and a Non-Member. They will BOTH appreciate in value after Quibble leaves but the Member one will appreciate for MORE than the non-member trinket AND Members can, of course, buy both.

2) DAGE ARMOR SPECIAL: Most of the items in Quibble's shop will stick to the normal pricing that we've been with for a while but Dage the Evil is working on a special Zombie Killer armor that will be 3000 ACS! We expect the higher price to make this one of the rarest AC armors in the game.

Oh yeah, as a Member Bonus, there will be a Member Only version of the Zombie Killer, exactly like the other one... except it only costs 1 AC.

Reens and Stratos will soon be in search of new Mods for AQW!

I cannot stress enough how much we appreciate how much the mods do for the game but there is a lot of game to patrol and most of the mods are volunteer staff so Reens has said that she will be looking for a few extra hands.

AS soon as the search has begun we will post all the information that you need to know to apply. Please do not spam our e-mail and Twitters asking to be made a mod. Being able to read carefully and understand what you're reading is a big part of being a mod so read this part carefully. Begging for us to make you a mod now will revel that you did not read this paragraph. That's a pretty good sign that you aren't mod material.

Until we ask for applications, please review the HOW TO BECOME A MOD page.

It won't be this released this week and probably not next week but I'm currently building a Member Only Death Knight Class (It will have different art than the DK Armor that came with the Doom Starter Package). It will take Rank 10 Doomwood Rep BUT there will be an AC Shortcut. Both versions will be Member Only.

214 days until Just Another Day