Our 10th Anniversary Class is here!

We are celebrating the AQWorlds 10th anniversary with a class full of DOOOOOOOOOM! Starting tonight, log in immediately unlock the ShadowScythe General Class for 2,000 AdventureCoins or begin the fight to unlock it. 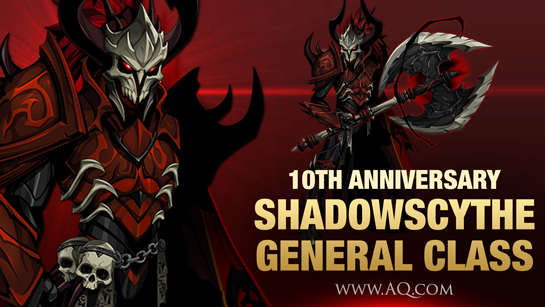 How to Get the Class

Starting Friday, October 19th, you can get the class by...

Last week, members got a chance to preview the class early and give us feedback on its skills and balance. We appreciate their help, and they'll be able to keep the armor art as our way of saying "Thanks!"

We built this class with a focus on group PvP. It’s a niche we haven’t really focused on much and we wanted the Paladin-crushing General to be an absolute boss in group PvP. In fact, your Undead Rebirth straight up prevents Paladins (and LightCasters) from getting or giving several of their auras! Outside of PvP we also wanted it to hold its own as a farming class and we gave it some of the best sustain out there.

Description: Recommended Enhancements: Lucky, Hybrid. By the powers of of Noxus, you have been reborn as an Undead General! Paladins, Lightcasters and even High Lords tremble at your dark presence. Gather your undead army and take what is rightfully yours!

Abilities:
Auto Attack: Shadow Slam
Deals damage on hit and grants a stack of Consuming Shadows which which debuffs your damage resistance by 4% and increases the damage done on all of your skills for 20 seconds. Stacks to 20. Also applies Overwhelming Shadows to your target, reducing their haste and damage by 10% for 2 seconds.
Type: Physical
ManaCost: 0
Cooldown: 4 seconds
AOE: 1
Medium range

Rank 1: Shadow Blast
Disperse the shadows in a blast of dark energy. Deals damage to up to 6 targets and has a 50% chance to petrify them for 1 second. Applies 3 stacks of Consuming Shadows per target hit. You also gain Rush of Unlife which increases your haste by 40% for 8 seconds. 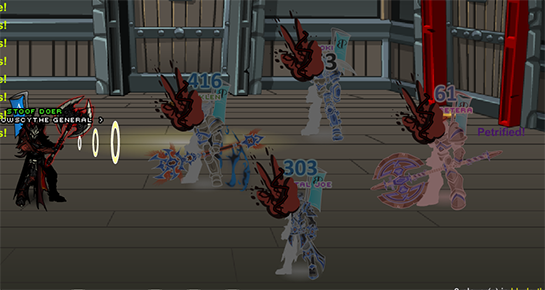 Rank 3: Undead Rebirth
You rebuild yourself. Applies a HoT that lasts 4 seconds. Your undeath creates an aura of decay around you preventing up to 6 hostile targets from healing for 4 seconds. Applies a Shadow Seal on you and your enemies which blocks your enemies from applying the following auras: Illuminated, Lumen, Light Wave, Soul Drinking, Abolish, Righteous Seal and Blinding Light. Shadow Seals lasts 10 seconds.
Type: Physical/Magical
ManaCost: 0
Cooldown: 10
AOE: 6 (hostile only)
Full screen range 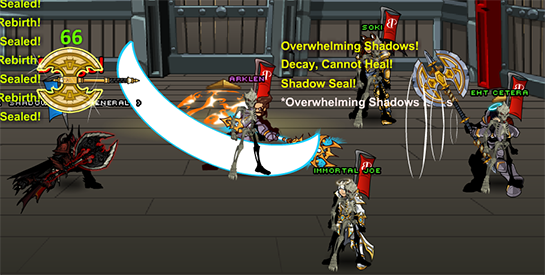