The Early Bird may Catch the Worm, but the Night Owl Catches the Sneak Peak.

I know it’s late. TRUST ME—it’s Thursday night (well, technically, Friday morning) and it has been a non-stop adventure since Monday. With soooo many exciting things going on, from planning out this week’s release to HeroSmash alpha’ing (is that a word?) to drooling over the cookie contest and preparing for the BattleOn Holiday Sweepstakes, there just hasn’t been enough time for the heavily-caffeined Beleen to make a proper Design Notes post.

If you haven’t already entered the BattleOn Holiday Sweepstakes, now is your last chance! On December 10th, 2010 (that’s today!), Artix Entertainment LLC. will randomly select FIVE winners for our Holiday Sweepstakes. Each winner will be contacted via e-mail and be allowed to select ONE item of their choice from our new AE Store, HeroMart.

All you have to do to enter is start a free Battleon Master Account on our portal site!  So what are you waiting for? Hurry up and enter the Sweepstakes before it’s too late!

Quibble is Coming to Town!

Your favorite traveling sales Moglin is finally making his way back to Battleon! And what goodies does he have for you in his sleigh  treasure chest? It doesn’t really matter if you’ve been naughty or nice this year… Quibble’s got something for everybody! 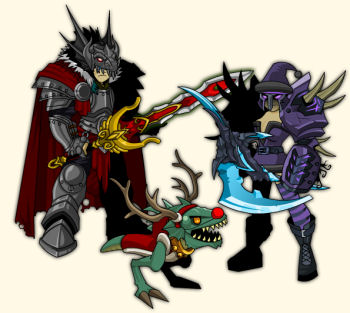 As usual, most of Quibby’s items cost AdventureCoins, but as an EXTRA SPECIAL BONUS for the holidays, this little guy has a RARE NON-MEMBER PET that will also be selling for ACs. This will be your only chance to get the rare Randolph the Red Nosed Reinzard pet for non-members!

Low on AdventureCoins? Here’s a buncha ways you can stock up for the Holidays:

What’s really cool about these AC items (besides the fact that they’re Frostval-themed) is that all of them can be stored in your Bank for FREE and FOREVER. This is especially helpful since no one knows if—or when—these Quibble items will ever be offered again!

This is it, guys and gals. We’ve come a long way in the Frozen Northlands. You helped defeat Queen Aisha’s ice army, saved Guwio Village, aided Old King Coal in his time of need, and braved the wintery wilderness in order to find Nythera.

You found her, all right. But she’s found something else… Chaos. And now she’s vanished into The Void.

Adak Amaroq has a theory on how YOU can get to the Void! Talk to him later tonight and see if the two of you can create a portal of some sorts that will take you into The Void. 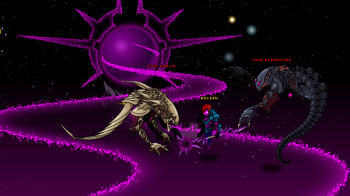 DragonFable players are going to LOVE this place. Actually, everyone is going to love this place—especially me, since it’s all pretty and pinkish ^_______^

No Artix, I didn’t come up with The Void color scheme—talk to Alina and Geopetal about that.

Anyhoo, back to what I was saying. What was I saying…? …something about something….

Oh yea! The Void in AQWorlds was created entirely from DragonFable’s Void. Map, monster, and weapon art was borrowed from DF in order to recreate the epicness that is The Void with a completely new storyline twist.

You will meet a new friend when you stumble into The Void. Luckily for you, your new pal is incredibly insightful and will enlighten you on everything you need to know about The Void. He even has an impressive Shop stocked with some DF-Classic and New Void Items… if you can afford his high prices. 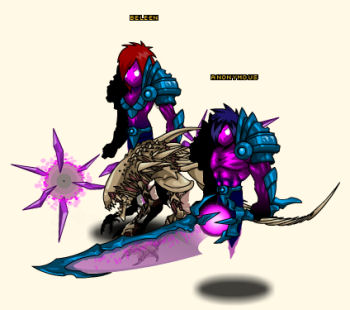 I really don’t wanna spoil the storyline, so I’ll just give you a teensy teaser: the Great Void Dragon summoned Nythera into The Void because she is willing to lose everything in order to gain anything!

And as if THAT’S not a high enough security measure, even if the 4 Void Spheres are found and placed within the door, then the only way to unlock it is by successfully completing a three-round “simon-says” style minigame.

Is Nythera too far gone? Has Chaos chaorrupted her beyond saving? Will you be able to find the 4 Void Spheres? What will happen if you get inside the Void Dragon’s lair? What IS The Void and its connection with Nythera, anyway?

So many questions! And guess what—they will all be answered tonight =D

Oh boy… it’s late. Getting sleepy! Someone once told me that sleeping is the best cure for sleepiness.