May the fates have mercy on us

Before we start tonight's brand new awesome BloodTusk Ravine saga  (Horcs vs Trolls!), I would like to share with you a potentially dangerous situation developing here at the Secret Underground Lab. *clears throat* That is right my friends... Ponies. 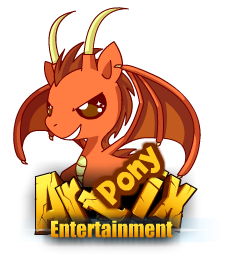 It started roughly a year ago when Rolith began pranking me by changing my computer and cell phone's wallpaper to pretty pretty pink ponies. This happened nearly every time I left my computer unguarded. Things escalated quickly. I do not dare tell you the depths that Rolith's pony related pranks sunk to... but you should all know. I now live in fear of ponies.

In June, Rolith created a minigame called "Hurry." It was a brilliant and addictive game. I green lighted his project and Rolith was promoted to project lead on the condition that he still coded DragonFable's weekly releases. Jemini QUICKLY (too quickly) volunteered to do the art for this new game. They were excited about this project. Tooooo excited. Toooo secretive. ....it should have been an indicator that something was terribly, terribly wrong.

Pony files started "accidentally" appearing on the development servers. I just assumed it was more of Rolith's pranks. Until... the next thing I knew... my Twitter was FLOODED with literally thousands of pony names from players. The source? www.PonyVsPony.com (Witness the horror for yourself)

When I confronted Rolith on this he quickly and confidently reminded me that I had said, "Nope. You have FULL creative control over this project. It is not like you are going to make a pony game. Hah. hah." For the past week... I have been a victim of the pony-apocalypse. ... and it just got worse. what started on Twitter. spread to Facebook ( http://www.facebook.com/ponyvspony ) and now there are PONY POSTERS ALL OVER THE OFFICE, THE TREES OUTSIDE, AND EVEN MY CAR. (...there are even ponies hanging in the bathroom) Please... do not encourage them. I can still hear Rolith's laughter from the other side of the lab.