How to Get LightCaster Class: Update

If you've already got the Class, this does not apply to you

The Good news: the LightCaster Class is CRAZY strong and REALLY easy to get.

The Not-So-Good news: the LightCaster Class is CRAZY strong and REALLY easy to get. 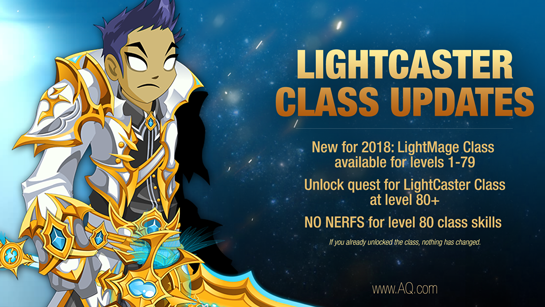 In the name of improving class diversity and healthier game balance moving forward, we're making some changes to the LightCaster Class requirements.

The Better news: If you already have the LightCaster Class, NOTHING changes for you. Nada. Zip. Zilch. Go on blasting bad guys like you always have.

The Best news: LightCaster Class is NOT CHANGING or being nerfed. (BUT Heroes who do not already have the class will need to hit level 80 before they can start to unlock it.)

If you don't have LightCaster Class yet, pull up a notepad and read on. You've unlocked a new quest!

If you do not have the LightCaster Class yet, starting this Friday, you'll need to obtain LightMage Class. LightMage is LightCaster’s younger sibling. It’s a less powerful but balanced version you'll unlock if you own the Evolved LightCaster or Enchanted LightCaster armors.

Rank up your LightMage Class and enjoy!

*If you already have the LightCaster Class you can get LightMage for free by buying a free LightCaster Token C from the same shop.

Rank up your LightCaster Class and enjoy!

Items required to start the quest are:

Avatar Of Death’s Scythe
Defeat Undead Hounds in /lostruinswar or /lostruins
Turn in Energy of Death to Aranx in /celestialrealm by clicking ‘Farming Quests’.

Burning Blade
Defeat Diabolic Warlord in /lostruinswar for a 1% chance to get a Burning Blade.

You'll need Aranx’s Pure Light to complete the quest, which has a 10% chance to drop from Aranx in /celestialarenad starting this Friday!

Now that the how is out of the way, here is the what!

Auto Attack (1)
Double click a monster to start Auto Attacking it. This is a basic attack, taught to all adventurers. Damage dealt is based on your weapon damage.

Light Beacon (2)
Cast down an elemental light beacon upon the target. Does lite damage and applies In The Beacon increasing the amount of damage your opponent takes by 2% per stack and lasts 10 seconds if not re-stacked. (Stacks up to 50 times)

Light Beam (3)
Beam your opponent with a ball of pure light. Deals significant damage that is guaranteed to hit but cannot crit. Each hit applies a stack of Blinding Light which decreases your opponent's chance to hit by 5% per stack and lasts 12 seconds if not restacked. Maxes out at 2 stacks.

Lumenator (4)
Casts a net of light upon your allies. Heals for 300% spell damage to up to 6 allies and applies Lumen which increases damage, crit damage, crit chance, hit chance, dodge chance, haste and damage resistance all by 8% for 12 seconds. Cannot stack.

Seared by the Light (5)
You focus the power of the entire sun on a single point. Does a large amount of damage on hit then deals 400% damage over 10 seconds.

Power of the Light (p3)
Increases all damage done by 10%

All in all, this is a solid single target mixed healing/dps class with a decent group buff. It doesn’t have that absolutely busted well rounded good-at-everything-ness that LightCaster has but it will hold you over for pretty much any non-major boss fight in the game. Also, pro-tip, LightMage and LightCaster's auras are different so you can stack LightMage's Lumen with LightCaster's Illuminated!